Rajasthan Royals looked in sensational form when they smashed 200-plus scores in successive wins over CSK and Kings XI Punjab. But since then the Royals’ batting has failed to perform consistently while the bowlers, sans Jofra Archer, looks toothless. David Warner’s side have rediscovered their mojo after starting with back-to-back defeats. 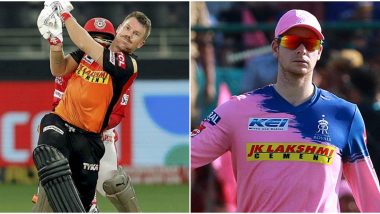 Sunrisers Hyderabad will aim to continue its momentum when they play a struggling Rajasthan Royals in match 26 of the Indian Premier League (IPL) season 13. SRH started their IPL 2020 campaign with disappointing defeats to RCB and KKR but have won three in their last four, which includes wins over Chennai Super Kings (CSK) and Delhi Capitals and a defeat to Mumbai Indians. Rajasthan Royals, in contrast, started their journey in a spectacular fashion with successive wins but have faltered since then and are currently on a four-match losing streak. Meanwhile, Sunrisers Hyderabad captain David Warner has won the toss and opted to bat first.  SRH vs RR Live Score Updates of IPL 2020.

Rajasthan Royals looked in sensational form, without Jos Buttler and Ben Stokes, when they smashed 200-plus scores in successive wins over CSK and Kings XI Punjab. But since then the Royals’ batting has failed to perform consistently while the bowlers, sans Jofra Archer, looks toothless. They did well to restrict Delhi Capitals under 185 on return to Sharjah but failed to chase down the score leaving them seventh in the points table with only four points from six games. They are in a must-win situation. SRH vs RR, IPL 2020 Live Cricket Streaming: Watch Free Telecast of Sunrisers Hyderabad vs Rajasthan Royals on Star Sports and Disney+Hotstar Online.

David Warner’s side, on the other, have rediscovered their mojo after starting with back-to-back defeats. Sunrisers Hyderabad beat Kings XI Punjab by 69 runs in their previous game and will be confident of carrying the same momentum to the Rajasthan Royals clash. Their openers have started scoring big and the bowlers are once again clicking as a unit despite injuries to Bhuvneshwar Kumar and Mitch Marsh.

SRH and RR have met 11 times in the history of the Indian Premier League and Hyderabad lead the head-to-head records with six wins while Rajasthan Royals have won five times. Sunrisers have, however, won three of the last four meetings between these sides although the Royals did beat them by seven wickets in the last meeting in IPL 2019.

(The above story first appeared on LatestLY on Oct 11, 2020 03:09 PM IST. For more news and updates on politics, world, sports, entertainment and lifestyle, log on to our website latestly.com).