No knock-out matches were there in the tournament. Hence, the team with maximum points in the league stage will win the tournament. Rachael Heyhoe-Flint-led England defeated Australia in the finals by 92 runs and won the inaugural edition of Women’s cricket World Cup in 1973. 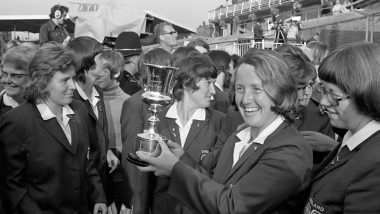 Women's cricket has a lot grown a lot over the years as many high profile nations have World-class players in their team. However, it was the 1973 Women's World Cup which brought the revolution to Women's cricket. In fact,it was this day only (July 28) when England were crowned the first champions of women’s cricket. Seven teams were participating in the tournament and were scheduled to play six matches each. This Day That Year: Mithali Raj Becomes the Highest Run Scorer in Women’s ODIs.

No knock-out matches were there in the tournament. Hence, the team with maximum points in the league stage will win the tournament. Rachael Heyhoe-Flint-led England defeated Australia in the finals by 92 runs and won the inaugural edition of Women’s cricket World Cup in 1973. This Day That Year: Sir Don Bradman Scored His 29th and Last Century in Test Matches.

The home side decided to bat first at Birmingham and the decision proved to be spot on. Opener Emid Blackwell scored a century while skipper Flint played a well-paced knock of 64 runs. Thanks to their contribution, England posted 279/3 in their allotted sixth overs.

🏆 x 1️⃣#OnThisDay in 1973, Rachael Heyhoe-Flint led England to the trophy in the inaugural edition of the Women's @CricketWorldCup.

England won the final game of the tournament against Australia by 92 runs to finish on top of the table and secure the title 👏 pic.twitter.com/T4d9HDUOQz

In reply, the Aussies never looked in the hunt as they lost wicket at regular intervals. Except opener Jackie Porter, no Australian batswoman was also to show resilience as England tightened their grip over the match. As a result, Australia could only manage 187/9 and lost the match by 92 runs.

To date, 11 Women’s World Cup have been played with England winning four of them while six titles went to inaugural’s edition runner-up Australia. In the year 2000, New Zealand also clinched the prestigious trophy. As of now, England, who won the tournament in 2017, are the defending champions and they will have fight for their title once more in the 2021 edition of the tournament which is scheduled to take place in New Zealand.

(The above story first appeared on LatestLY on Jul 28, 2020 05:45 PM IST. For more news and updates on politics, world, sports, entertainment and lifestyle, log on to our website latestly.com).