This Day That Year: Sir Don Bradman Scored His 29th and Last Century in Test Matches 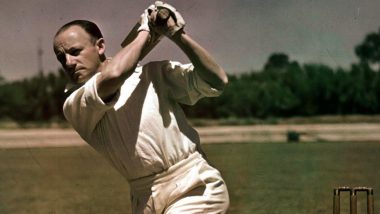 Sir Don Bradman was arguably the best ever batsman to have graced the game and his numbers in Test cricket are nothing short of sensational. The former Australian captain scored 6996 runs in 52 Test matches with a jaw-dropping average of 99.94. In fact, it was this day only (July 27) in 1948 when the legendary batsman scored his 29th and last century in Test cricket. The occasion was the fourth Test of Australia’s 1948 tour of England and the venue was the iconic Headingley Cricket Ground in Leeds. Some Lesser-Known Things to Know About Sir Don Bradman.

At stumps on Day 4, England were batting at 362/8, leading by 400 runs. Only two results looked possible – England’s victory or a draw. The home side finally declared at 365/8 in order to bundle out the Aussies to clinch the Test match. However, Bradman had different ideas as he played a gem of a knock. The veteran batsman, who scored just 33 runs in first innings, brilliantly tackled the England pacers and made a mockery of them. He gave full respect to the good deliveries while the bad ones were dispatched to boundaries. Sir Don Bradman Records.

He smashed a 🔥 173* on the last day of the Leeds Test to lead Australia to a seven-wicket victory over England! pic.twitter.com/h3jvb46K1D

Bradman was well supported by opener Arthur Morris who also played a colossal knock of 182 runs. The duo piled up 301 runs for the second wicket as the match slipped away from England’s grasp. The skipper crossed the 100-run mark but didn’t lose his concentration even after that. Arthur was dismissed with Australia needing just 44 runs to victory. However, Bradman remained unbeaten till the end and made sure there’s no twist in the tale. He scored 173 runs in total as the visitors won the game by seven wickets.

The fifth and last Test match of this series was the last of Bradman’s illustrious career. The right-handed batsman needed just 4 runs to retire with an average of over 100. However, he bagged a duck and finished with an average of 99.94.

(The above story first appeared on LatestLY on Jul 27, 2020 01:52 PM IST. For more news and updates on politics, world, sports, entertainment and lifestyle, log on to our website latestly.com).