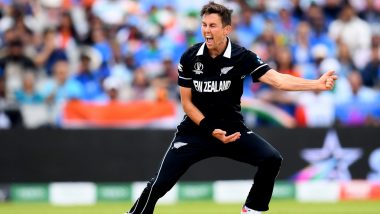 International cricket still continues to be on a halt amid the COVID-19 crisis. In the meantime, however, we can relish some of the great moments from the games which have been played. In this article, we’ll relive Trent Boult’s sensational hat-trick during the New Zealand vs Australia league-stage match in the ICC 2019 World Cup. The game was certainly emotional for the Kiwis as the two sides’ last 50-over World Cup meeting occurred in the finals of 2015 World Cup where the Men in Yellow emerged victorious. Boult, who also featured in that game, was determined to redeem his side and he bowled a stellar spell. Lockie Ferguson Birthday Special: Lesser-Known Facts About the New Zealand Pacer As He Turns 29.

Winning the toss at the iconic Lord’s stadium, Aussie skipper Aaron Finch opted to bat first. The decision didn’t look impeccable as the likes of Boult made his presence felt straight away by dismissing Finch for just 8. David Warner and Steve Smith also couldn’t do much as the Aussies were reeling at 46/3. However, Usman Khawaja (88) joined forces with wicket-keeper batsman Alex Carey (72) and the two southpaws guided their side to safety.

It was a close-run thing against Steve Smith's stunner, but you voted Trent Boult's sensational hat-trick as yesterday's @Nissan Play of the Day 👏#CWC19 | #BACKTHEBLACKCAPS pic.twitter.com/XKsFFEFa0j

However, the run-rate was always on the lower side as wickets weren’t left for the Aussies. Nevertheless, Khawaja was well set and was eyeing to get a hundred. However, Kane Williamson asked Trent Boult to bowl the last over of the innings which proved to be spot-on.

After giving two singles in the first two balls, Boult rattled the stumps of Khawaja and sent him to the pavilion. He, then, gave Mitchell Starc a taste of his own medicine by dismissing him with an impeccable yorker. He also dismissed Behrendorff and completed a brilliant hat-trick. It was his second hat-trick in ODIs and he also became the first New Zealand bowler to bag a World Cup hat-trick.

Courtesy his brilliance, Australia could only post 243-9 while batting first. However, the Kiwi batsmen failed to deliver as Australia went on to win the game by 86 runs. Boult’s counterpart Mitchell Starc bagged a five-wicket haul.

(The above story first appeared on LatestLY on Jun 29, 2020 04:38 PM IST. For more news and updates on politics, world, sports, entertainment and lifestyle, log on to our website latestly.com).