Virat Kohli Fumes at Umpire for Approving Henry Nicholls’ Review Despite Time Out During IND vs NZ 2nd ODI, Netizens Come Out in Indian Captain’s Support 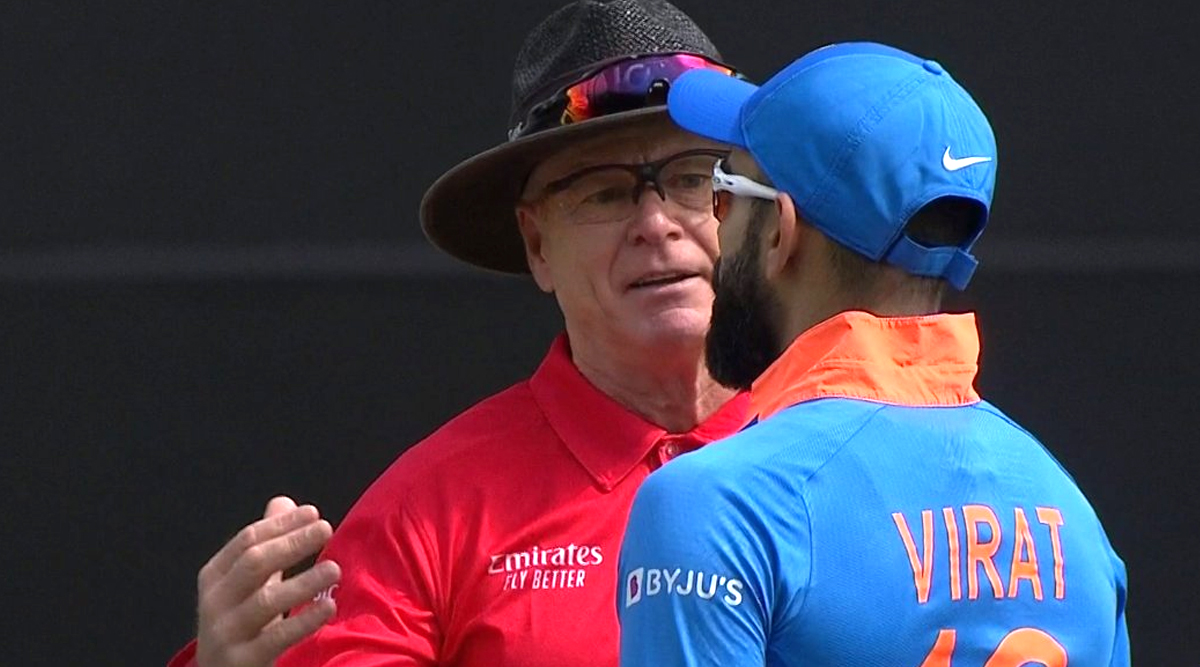 Of late, the umpires have received a lot of criticism regarding their on-field decision and another display of it was seen during second India vs New Zealand ODI at Auckland. Kiwi opener Henry Nicholls has adjudged LBW off a ball from Yuzvendra Chahal. The batsman decided to go upstairs. Well, he exceeded the time limit of 15 seconds to take the review but still, Bruce Oxenford approved his review and signalled the third umpire to recheck the dismissal. Indian skipper Virat Kohli was certainly not amused by the umpire’s mistake and he fumed out at the on-field umpire. New Zealand Vs India, Cricket Score 2nd ODI Match.

Nicholls, eventually, was given out by the third umpire but Kohli was certainly not happy about the decision getting reviewed. The 31-year old is certainly not someone who holds back and that’s exactly what was seen during the encounter in Auckland. On many occasions, he has also been bashed for his ‘arrogant’ behaviour. However, the netizens came out in Kohli’s support this time and bashed the umpire for his poor decision making.

@ICC this is ridiculous, the umpire allowing a DRS after timer has ended!! @imVkohli was absolutely right arguing with the umpire...... Completely ridiculous

Kohli also not happy with the decision

It is not fair for cricket.while the drs time was over , the umpire has taken the review , why @imVkohli @BCCI @StarSportsIndia #NZvsIND

Very bad umpiring in 2nd ODI between IND and NZ. As time was over so how the third umpire entertain the DRS. Very shaneful as it appears on big screen too. @ICC @BCCI @imVkohli #askstar @StarSportsIndia @RaviShastriOfc

Earlier in the day, Virat Kohli won the toss and invited the home team to bat. Navdeep Saini replaced Mohammed Shami in the line up while India have also included Yuzvendra Chahal in their line-up, replacing Kuldeep Yadav. For New Zealand, Kyle Jamieson and Mark Chapman are inducted in the side in place of Mitchell Santner and Scott Kuggeleijn. India are already 0-1 down in the three-match series and the second ODI is a do-or-die encounter for them while the Kiwis have the chance the seal the deal with a win in this game.