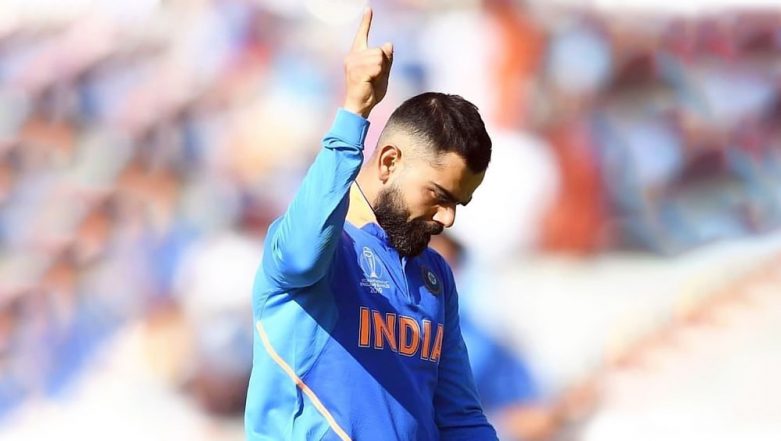 A day after India's comfortable victory over West Indies in ICC Cricket World Cup 2019, Indian skipper Virat Kohli shared a motivating post on Twitter, wishing a good day to everyone. The Indian team rose with a spectacular victory over West Indian side by 125 runs and is the only team to remain unbeaten in ICC World Cup 2019 tournament so far. Virat Kohli vs Babar Azam, Who Plays the Cover Drive Better? ICC Wants Your Opinion, Watch Video

Kohli, who has hit four fifties in CWC 2019 so far, was excellent with the bat in the match against West Indies, hitting 72 runs off 82 balls at Emirates Old Trafford, Manchester. It looks like the right-handed batsman has been motivated by Indian team's and his own amazing performance in the tournament and expressed his feeling with an inspiring Twitter post. Have a look at Virat Kohli's post below. Virat Kohli Becomes Fastest Batsman to Score 20,000 International Runs, Twitterati Hail King Kohli!

Good day to you too Virat

Belief is a beautiful gift. We must all use it. Good day to everyone 🤝✌ pic.twitter.com/KnFbArIQUS

Meanwhile, India has won five matches out of six games in ICC Cricket World Cup 2019. One match against New Zealand was washed off due to rain. The Virat Kohli-led side holds 2nd position on the points table currently with 11 points while playing one match less than their successor Australia. India is going to play three more matches in World Cup 2019. India will take on England on July 30, while the matches against Bangladesh and Sri Lanka will be played on July 2 and July 6 respectively.