Virat Kohli's childhood coach Rajkumar Sharma has revealed that the star batter is not 'under pressure' to hit his long-awaited 71st century, adding that he never goes after records and contributing to India's win is important for him rather than worrying about the personal milestone. 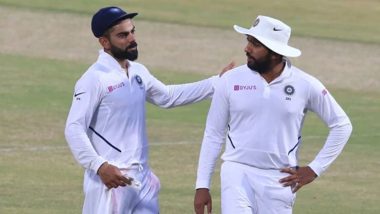 New Delhi, June 27 : Virat Kohli's childhood coach Rajkumar Sharma has revealed that the star batter is not 'under pressure' to hit his long-awaited 71st century, adding that he never goes after records and contributing to India's win is important for him rather than worrying about the personal milestone. The 33-year old Kohli has gone more than 100 innings in all forms of cricket including IPL without scoring a hundred since hitting 136 in Kolkata against Bangladesh in November 2019. He has often got starts but he hasn't been able to convert them into big scores. He has even passed fifty several times since that innings in Kolkata but hasn't managed to hit his 71st international century yet. IND vs ENG, 5th Test: India Not in a Hurry To Name Stand-In Captain in Place of Rohit Sharma.

"No, he is not at all under pressure. Contributing to the team and India's victory is more important for him rather than getting his hundred. He never goes after records. So, as long as he's doing well and is contributing well with the bat, he is not worried about his personal milestone," Rajkumar told IANS in an interview on the sidelines of an award show in the national capital. During the ceremony, Kartikeya Sharma, founder of Pro Sportify and Member of Parliament-elect (Rajya Sabha) from Haryana was conferred with "Indian Sports Fan Award 2022" in presence of Haryana Sports Minister Sandeep Singh, Olympic medallists Karnam Malleshwari, wrestler Yogeshwar Dutt and others, for his contribution to Indian sports via various leagues.

Virat looked in fine touch during India's four-day warm-up game against Leicestershire County Club, which ended in a draw. It's often been seen that the star cricketer generally doesn't play the orthodox square cut especially in Test cricket but he found a way with the flashy punches in the warm-up game. Asked whether Virat has added a few new shots in his armoury, the coach said that Virat always tries to adapt well with the conditions and they have conversations from time to time. "I think he was playing really well and got some 60-odd runs in the second innings. He looked in great nick and I feel he will continue that in the coming series. Virat is a sort of player, who keeps working on his batting based on the requirement of the conditions. He always keeps on adding a few shots in his armoury so that he can counter or adjust with the condition, where he is playing," said Sharma. "Adaptability has been his best strength, which he is doing now. We do have conversations from time to time but there is nothing much to advise him, since he is relaxed and playing well," he added. India vs England, 5th Test 2022: Mayank Agarwal To Join Squad As Cover for COVID-19 Hit Skipper Rohit Sharma.

Rohit Sharma, the designated India skipper for the Brimington Test, has tested Covid-19 positive and there has been much chatter on social media regarding appointing Kohli as the captain for the rescheduled Test match against England. Notably, it was Virat, under whose captaincy India were leading the five-match series 2-1 against England last year, before the fifth and last Test was postponed due to Covid-19 fears in the visiting camp. So, most of the Kohlii fans want to see the Delhi-born cricketer leading the side for the lone Test on this tour. However, RajKumar doesn't see that happening.

"He was not sacked or removed, he himself left the captaincy. So, I don't think I will see him leading again. I'm not very sure what the selectors or the BCCI will decide? Virat is a team-man and wants India to do well and contribute to the team, which I think he's doing very well," he said. The much awaited rescheduled Test against England is scheduled to be played from July 1 at Edgbaston.

(The above story first appeared on LatestLY on Jun 27, 2022 03:26 PM IST. For more news and updates on politics, world, sports, entertainment and lifestyle, log on to our website latestly.com).