Wasn’t Focused on Scoring a Hundred: Sneh Rana After Heroic Effort in India’s Draw Against England

Rana played a crucial role, scoring 80* and also taking a four-wicket haul to help Indian women snatch a draw against England in the one-off Test match played from June 16-19 at the Bristol County Ground. 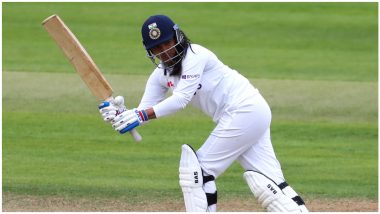 After her heroic effort helped India salvage a brave draw from the jaws of defeat, Indian all-rounder Sneh Rana stated that she wasn't focused on scoring a hundred but instead planned to stay at the crease for the sake of the team. Rana scored a magnificent 80* which helped the Indian women's team share the spoils against their English counterparts in the one-off Test at the Bristol County Ground from June 16-19. Rana not only batted nicely but also bagged a four-wicket haul in England's innings. Coupled with her heroic batting effort, Rana became the first Indian and only fourth cricketer overall to score 50+ runs and take a four-wicket haul in one innings, in the same Test match. Sneh Rana Becomes First Indian Player To Score 50+ Runs and Take Four-Wicket Haul on Women’s Test Debut

"At that time, I didn't focus much on scoring a century, because at that time, my team needed me to stay there, so I didn't think much about scoring the century... I had kept it simple, to contribute for the sake of the team," Rana, while talking to the press after the match, said. Apart from her individual performance, she also struck a match-saving record ninth-wicket partnership of 104 runs with Taniya Bhatia, which helped India pull off the draw. Apart from Rana, India found star performers in Smriti Mandhana, who scored 78 in the first innings, Deepti Sharma, who scored 54 in the second, and Shafali Verma, who starred with 96 and 63 respectively.

(The above story first appeared on LatestLY on Jun 20, 2021 06:43 PM IST. For more news and updates on politics, world, sports, entertainment and lifestyle, log on to our website latestly.com).