AC Milan vs Manchester United match in the second leg of UEFA Europa League 2020-21 last 16 will be played at the San Siro Stadium on March 18 (Thursday mid-night). The game is scheduled to begin at 01:30 am IST (Indian Standard Time). 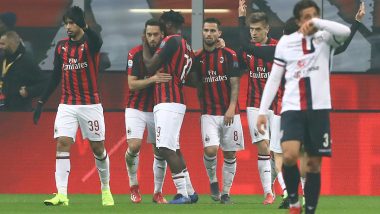 UEFA Europa League Live Streaming Online: AC Milan and Manchester United renew their rivalry in the Europa League with a high octane round of 16 second leg tie at San Siro. Hosts AC Milan will start as the favourites considering they have the away goal in the kitty but given Manchester United’s dream away form, the visitors are more than capable of salvaging the tie. The first leg was a damp affair with both these iconic clubs rarely creating openings. Manchester United led through a solitary goal right until the death but the visitors deservedly scored to finish the game at 1-1. Ole Gunnar Solskjaer has masterminded some brilliant away wins for the Red Devils in Europe and he will need all the luck to script another comeback. MIL vs MUN Dream11 Prediction in UEFA Europa League 2020–21: Tips To Pick Best Fantasy XI for AC Milan vs Manchester United Football Match.

Zlatan Ibrahimovic has regained full fitness and is in line to start for AC Milan. Alessio Romagnoli, Rafael Leao, Ante Rebic and Davide Calabria will undergo late fitness test to determine their availability for the game. Franck Kessie was colossal in the draw in the first leg as he completely dominated the midfield. His energy and passing will come in handy for the hosts as they look to cut out United’s high pressing game.

Manchester United have Paul Pogba and Donny Van de Beek back in the travelling squad but Edinson Cavani is not fully fit and has been ruled out. Bruno Fernandes and Marcus Rashford hold the key for the visitors attacking play and need Mason Greenwood to make those darting runs ahead of them. Dan James has not contributed much in terms of goal and assists in recent weeks but his work rate and pace on the break means he will likely get another start. Zlatan Ibrahimovic vs Bruno Fernandes: Ibra Will Be Playing Against His Former Club Manchester United In UCL 2020-21 Match, AC Milan Stefano Pioli Confirms.

AC Milan vs Manchester United match in the second leg of UEFA Europa League 2020-21 last 16 will be played at the San Siro Stadium on March 18 (Thursday mid-night). The game is scheduled to begin at 01:30 am IST (Indian Standard Time).

Fans in India can live telecast the AC Milan vs Manchester United match on Sony Sports channels. Sony Pictures Sports Network (SPSN) is the official broadcaster for UEFA Europa League 2020-21 in India. So Fans can tune into Sony Ten SD and Sony Ten HD channels to catch the live-action of the UEL match.

Those unable to follow the match live on television can watch the AC Milan vs Manchester United clash online. SonyLiv, the OTT of Sony Network, will be live streaming the first leg of the last 16 clash online for fans in India. Tough game for both these European giants and the game may very well be decided on a penalty shootout at the end of regulation time.

(The above story first appeared on LatestLY on Mar 18, 2021 03:00 PM IST. For more news and updates on politics, world, sports, entertainment and lifestyle, log on to our website latestly.com).