Antoine Griezmann Denies Rift With Lionel Messi, Distances Himself From ‘Negative’ Comments Made by Former Agent and Uncle

Antoine Griezmann has denied any rift with Barcelona teammate Lionel Messi and also distanced himself from all negative comments made his former agent and his uncle. Griezmann's former agent Eric Eric Olhats and Uncle Emmanuel Lopes had targetted Messi and blamed the Argentine for Griezmann's struggles at Barcelona. 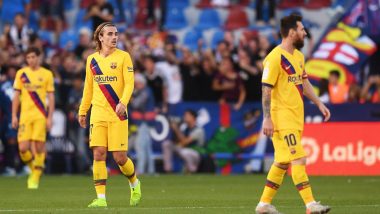 Antoine Griezmann has denied rumours of any rift with Barcelona teammate Lionel Messi and has also distanced himself from the recent comments made about the Argentine by his former agent and uncle. Rumours about a possible rift between the two had been doing rounds in the media ever since Griezmann’s former agent and his uncle came hard at Messi and blamed the six-time Ballon d’Or winner for Griezmann’s struggles at Barcelona. But Griezmann speaking to reporters after Barcelona’s 4-0 win over Dynamo Kyiv, which secured their qualification to UEFA Champions League round of 16 stage, denied any such rift and said he had nothing to do with those comments. Cristiano Ronaldo, Lionel Messi, Robert Lewandowski Among 11 Nominees for Best FIFA Men’s Player Award

Earlier this month, Griezmann’s former agent Eric Olhats caused a stir on social media when he blamed Messi for Griezmann’s struggles and bad form at Barcelona. “Antoine arrived at a club with serious problems where Messi controls everything,” Olhats told Mundo Deportivo. “He is both emperor and monarch and did not see Antoine’s arrival with good eyes. Lionel Messi Transfer News Update: Manchester City Draw Intriguing 10-Year Plan For Barcelona Superstar.

“Messi’s attitude has been deplorable, he has made him feel it. I’ve always heard Antoine say that he had no problems with Messi, but never the other way around. It is the regime of terror. Either you are with him, or you are against him,” he added.  Those comments led to a section of fans blocking Griezmann’s car outside Camp Nou and asking him to show some respect towards Messi.

His uncle Emmanuel Lopes also added to the uproar when he said it was not easy to play in the same team as Messi. The Argentine, however, hit back last week on return from international duty when he told reporters he was tired of being blamed for every problem at Barcelona. Now Griezmann has come out and denied his relationship with his former agent and also his uncle.

"I have been putting up with comments for a long while and now it's time to say enough," he was quoted as saying in an interview with Movistar. "My agent is my sister, but she doesn't speak. Neither do my parents. As no one speaks, Eric offers an opinion but that can do a lot of damage and create doubts about my relationship with Leo. Leo knows I have a lot of respect for him. I learn from him.”

“My uncle doesn’t know how football works. And in the end, the journalist ended up getting the statement out of him. I told Leo that I never speak to them, in fact, I don’t even have my uncle’s phone number. My parents don’t talk to Eric either, so who is going to talk to him? He can do a lot of damage, and create problems in the dressing room,” he added.

Griezmann meanwhile, came off the bench against Dynamo Kyiv and scored in added-time to help Barcelona beat the Ukrainian side 4-0 and seal a berth in the UCL round of 16 stage with two games to spare. Barcelona are still on top of Group G with 12 points from four matches while Juventus, who beat Ferencvaros 2-1 to secure their qualification, are three points behind at second place.

(The above story first appeared on LatestLY on Nov 25, 2020 04:23 PM IST. For more news and updates on politics, world, sports, entertainment and lifestyle, log on to our website latestly.com).