Arjen Robben joined Groningen at the age of 12 and made his debut for the first team during the 2000-01 season. The former Netherlands international went on to achieve huge success at the world stage, predominantly with Bayern Munich, but when asked to help his old club, he decided to reverse his retirement. 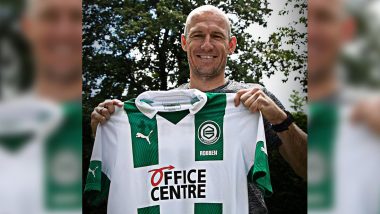 Over the years, we have seen several football players returning to their hometown club as they enter the twilight period and decide to draw curtains over their careers. However, this story is slightly different as Dutch legend Arjen Robben has come out of retirement to join boyhood club FC Groningen who have been hit hard by the financial crisis caused by the coronavirus outbreak. African Nations Cup 2021 Postponed to January 2022 Due to COVID-19 Pandemic.

Over the past few months, the COVID-19 pandemic has had a huge impact on the footballing world, where small teams such as Groningen are suffering financially and were forced to lay off several employees in order to balance the books. The epidemic cost the Erediviese club around an estimated €5 million, which is 25 per cent of their total annual turnover. FIFA Women's World Cup 2023: NSW Premier Gladys Berejiklian Expresses Elation After Australia, New Zealand Get Hosting Rights for World Cup.

The Netherlands were one of the countries along with France, who decided to prematurely end the current domestic footballing season (Eredivisie 2019-20) due to the pandemic. This resulted in a huge set-backs to the clubs, like Groningen who don’t have the financial power as some of the biggest clubs in Europe. Keeping this in mind, sporting director Mark-Jan Fledderus and general director Wouter Gudde asked Arjen Robben to come home.

Arjen Robben joined Groningen at the age of 12 and made his debut for the first team during the 2000-01 season. The former Netherlands international went on to achieve huge success at the world stage, predominantly with Bayern Munich, but when asked to help his old club, he decided to reverse his retirement.

‘I asked myself why I'd do it, but the answer is simple. I love this club and it's about loyalty. That was decisive. I would not have come out of retirement for any other club, not for Bayern either’ Robben said about his decision.

And the 36-year-old’s impact was imminent even before playing a single minute for them. Within days of Robben’s arrival, Groningen sold an additional 2,500 season tickets for 2020-21, taking their total to over 11,000. Jersey sales have gone through the roof as the club is now struggling to meet the high demand of replica kits for next season, with Robben’s shirt being the number 1 choice.

Though repercussions due to the pandemic are not yet completely over, Robben's arrival has significantly boosted Groningen’s bank balance and the club can finally look towards the next season while having to worry a little less about financial collapse.

(The above story first appeared on LatestLY on Jul 02, 2020 04:27 PM IST. For more news and updates on politics, world, sports, entertainment and lifestyle, log on to our website latestly.com).