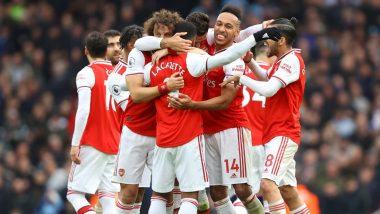 EPL Live Streaming Online in India: Arsenal host EPL champions Liverpool at the Emirates Stadium looking to get back to winning ways after a drab display against Tottenham Hotspur. It has been a season to forget for the Gunners as they languish at 9th in the points table. Mikel Arteta has brought about some changes in their gameplay, but there is still a long way to go if they hope to reach replicate the success of past Arsenal squads. Liverpool, on the other hand, are a team on the rise with their immediate focus on breaking Manchester City’s 100 point milestone. With three games remaining in the league for the Reds, they need to win all of these as they are currently on 93 points. ARS vs LIV Dream11 Prediction in Premier League 2019–20: Tips to Pick Best Team for Arsenal vs Liverpool Football Match.

Eddie Nketiah is serving his three-game suspension owing to a red card received in the match against Leicester City. He along with the injured Calum Chambers are unavailable for selection. Alexandre Lacazette’s confidence which seems to have deserted him is showing signs of improvement with the French striker scoring a world-class goal against Spurs in the last match. He will have pacey wingers in Pierre-Emerick Aubameyang and Nicolas Pepe for the company in the attacking third. Arsenal’s defence is an area of concern for them with the likes of David Luiz and Shkodran Mustafi playing some sub-standard football.

Skipper Jordan Henderson along with James Milner and Joel Matip will not feature against Arsenal due to fitness issues. Naby Keita should get the nod to replace Jordan Henderson in the playing eleven with Fabinho and Georginio Wijnaldum in support in midfield. The preferred front three of Mo Salah, Sadio Mane and Roberto Firmino will relish playing against an Arsenal side susceptible to mistakes at the back. Jurgen Klopp Displeased As Manchester City’s UEFA Ban Gets Overturned by CAS, Says ‘Not a Good Day for Football’.

Arsenal vs Liverpool clash in Premier League will be played at Emirates Stadium on July 16, 2020 (Wednesday mid-night). The game has a scheduled timing of 12:45 am IST.

Where to Watch Arsenal vs Liverpool, Premier League 2019-20 Football Match on TV?

How to Get Free Live Streaming of Arsenal vs Liverpool, Premier League 2019-20 Football Match?

Premier League 2019-20 can be viewed on Disney+ Hotstar, the official OTT platform of Star Sports. So fans can either download the Disney+ Hotstar app or log onto the website, ton watch the live streaming of Chelsea vs Norwich. Despite not playing up to their usual standards in their last few encounters, Liverpool have enough quality about them to beat Arsenal tonight.

(The above story first appeared on LatestLY on Jul 15, 2020 04:40 PM IST. For more news and updates on politics, world, sports, entertainment and lifestyle, log on to our website latestly.com).