Jurgen Klopp Displeased As Manchester City’s UEFA Ban Gets Overturned by CAS, Says ‘Not a Good Day for Football’

Liverpool boss Jurgen Klopp wasn’t also amused by the decision. As per the 53-year-old feels, the breaching of the financial pay rules shouldn’t be forgiven and he even called the verdict ‘not a good day for football.’ Along with the two-year ban, Manchester City were also handed a fine of €30m. However, after the ruling on Monday, the fine was also reduced to just €30m. 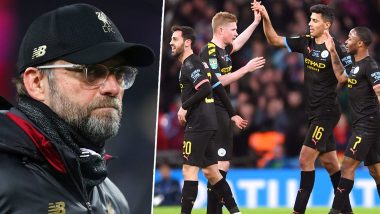 Many eyebrows were raised over the FPP regulations after Manchester City’s two-year ban from UEFA was lifted by the Court of Arbitration for Sport (CAS). Earlier this year, the former Premier League champions were punished for breaking the Financial Fair Play rules as they were banned from the European league for two years. However, Manchester City’s appeal against the verdict got successful which ignited many controversies. In fact, Liverpool boss Jurgen Klopp wasn’t also amused by the decision. As per the 53-year-old feels, the breaching of the financial pay rules shouldn’t be forgiven and he even called the verdict ‘not a good day for football.’ Manchester City Two-Year Ban Lifted by CAS, Eligible to Play in UEFA Champions League 2020–21.

“I don’t think it was a good day for football yesterday, to be honest,” Klopp told a virtual news conference on Tuesday FFP is a good idea. It is there for protecting teams and the competition, so that nobody overspends and have to make sure the money they want to spend is based on the right sources.

Along with the two-year ban, Manchester City's fine also got reduced from  €30m to just €10m. While announcing the ban, UEFA stated that the former Premier League champions have been found guilty for ‘overstating their sponsorship revenue.’ After the revised decision, however, CAS ruled that City did not breach FFP rules by disguising equity funding as sponsorship.

Klopp further added that the clubs should follow the FPP rules religiously as that will be good for the game. Manchester City Two-Year Ban Lifted by CAS, Football Fans Question UEFA's FFP Rule.

“It’s not up to me to judge this and I don’t but I think this FFP framework we should stick to. I hope FFP stays just because it gives kind of borders that you can go to, but not over it, and that’s good for football. If you start doing that nobody has to care any more and the richest people or countries can do what they want. It will make the competition really difficult and I think that would lead automatically to a kind of world super league with like 10 clubs and it would depend on who owns the clubs and not the names of the clubs. It makes sense to have these rules,” Klopp further added.

Meanwhile, Liverpool will lock horns with Manchester United in their forthcoming Premier League encounter and stakes are quite high as they are eyeing to equal Manchester City’s record 100-point haul in a single edition of Premier League. At the moment, Liverpool have 93 points with three games being left to play.

(The above story first appeared on LatestLY on Jul 15, 2020 08:52 AM IST. For more news and updates on politics, world, sports, entertainment and lifestyle, log on to our website latestly.com).