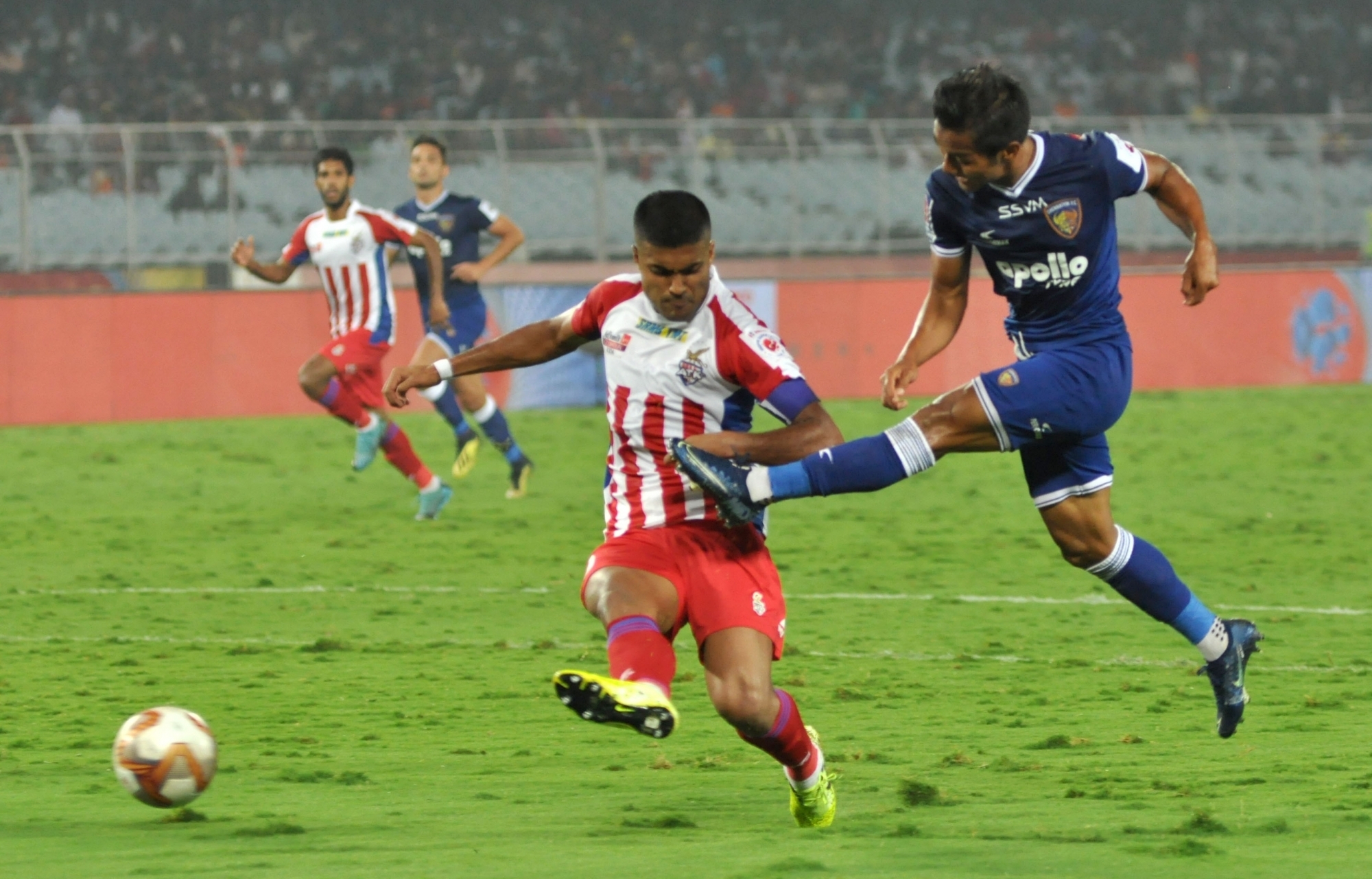 Kolkata: Players in action during an Indian Super League (ISL) match between Chennaiyin FC and ATK at Salt Lake Stadium in Kolkata, on Feb 16, 2020. (Photo: IANS)

ATK, Chennaiyin FC will face each other in the Indian Super League (ISL) 2019-20 final chasing their third ISL title each in six years of the championship. Both teams are undefeated in the finals but will be meeting each other for the first time in the summit clash. ATK won the title in 2014 and 2016, while Chennaiyin FC lifted the trophy in 2015 and 2017. Both teams won once each in the league stage of the competition with ATK beating Chennaiyin FC 1-0 in Chennai and Owen Coyle’s side avenging that loss with a 3-1 win in Kolkata. As both sides face each other in the title clash, take a look at their head-to-head (H2H) records and results of their last five encounters in the history of the ISL. ATK FC Vs Chennaiyin FC - Live Football Score, Final.

Chennaiyin FC were unbeaten in their last eight leagues games heading into the knockout stage of the tournament. Seven of those eight games – barring the goalless draw against Bengaluru FC – were straight wins. Coyle’s boys also thumped FC Goa 4-1 in the 1st leg of the semi-final clash and lost the 2nd 4-1 but advanced to the final on aggregate. ATK vs Chennaiyin FC Dream11 Prediction in ISL 2019–20 Final.

ATK, on the other, won four, lost to Chennaiyin FC and drew 2-2 against Bengaluru FC in the league stage before also beating the defending ISL champions 3-2 on aggregate in the semis. Both the finalists have faced each other 14 times in six seasons and ATK lead Chennaiyin FC with six wins while the latter have four victories. ATK vs Chennaiyin FC, ISL 2019-20 Final to Be Held Behind Closed Doors Following Coronavirus Threat.

Owen Coyle has suddenly transformed Chennaiyin FC into a formidable attacking force. They are on a five-match winning run but are up against a side with a second-best defensive record in the league. ATK also beat Chennaiyin FC 1-0 away from home. But Rafael Crivellaro puts the visitors ahead as early as the seventh minute in Kolkata and Andre Schembri doubles the score in the 39th minute. Roy Krishna pulls one behind for ATK a minute later and ATK are still chasing the game in extra-time before Nerijus Valskis seal the win for Chennaiyin FC with an injury-time strike.

ATK have just thrashed Hyderabad FC 5-0, while Chennaiyin FC are winless from their opening two matches. But John Gregory’s men look dangerous at home but are wasteful in front of goal. David Williams then strikes home from a counter-attack in the third minute of the second half and that is enough for an ATK victory.

Jayesh Rane puts ATK ahead in the 14th minute but Thoi Singh levels the scores for Chennnaiyin FC 10 minutes later. Manuel Lanzarote then converts two penalties to seal the win for the visitors and all Isaac Vanmalsawma can do is get a consolation goal.

Kalu Uche, starting just his third game of the season, heads ATK ahead in the third minute and John Johnson doubles the lead in the 13th minute. And when Carlos Salom made it 1-2 the game looks to be destined to be a scoring thriller but both teams fail to score again and ATK wins.

Teddy Sherringham has been sacked by ATK and Ashley Westwood has taken over the reins. But ATK’s misery run continued. Martin Paterson headed ATK ahead one minute from the half-time whistle but Chennaiyin FC come out firing in the second half and Mailson Alves and Jeje Lalpekhlua score twice inside 12 minutes to complete a remarkable turnaround for the visitors.