The Ballon d'Or 2021 ceremony is just a few hours away and as the clocks are ticking the fans from all over the world have started speculating on who will be the winner of the prized possession. Not just the fans but also the footballers have made their picks for the coveted trophy. The likes of Lionel Messi, Ivan Rakatic, Thomas Muller have chipped in with their opinion 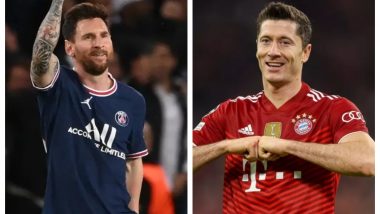 The Ballon d'Or 2021 ceremony is just a few hours away and as the clocks are ticking the fans from all over the world have started speculating on who will be the winner of the prized possession. Not just the fans but also the footballers have made their picks for the coveted trophy. The likes of Lionel Messi, Ivan Rakatic, Thomas Muller have chipped in with their opinion on who will win the Ballon d'Or 2021. However, the most notable thing was that none of these footballers picked Cristiano Ronaldo as their choice of the winner. For now, let's have a look at picks by the footballers for Ballon d'Or 2021. Lionel Messi Picks Winner for Ballon d’Or 2021, Axes Arch-Rival Cristiano Ronaldo From His Options.

So as mentioned previously, Lionel Messi will not vote for Cristiano Ronaldo. He has chosen a couple of names from his team- Kylian Mbappe, Neymar Jr. Furthermore he tipped Karim Benzema and Robert Lewandowski to win the Ballon d'Or 2021.

There might be a bitter rivalry between Sergio Ramos and Lionel Messi, but now the two are quite friendly with each other. So much that the former Real Madrid is hoping for Lionel Messi to win the prized possession. "Yes, of course [I hope he wins]. I'm going to defend the guys in my team. I wish him all the luck in the world," he said.

Chelsea forward Mason Mount opted for a couple of his teammates Jorginho, N'Golo Kante for winning the prized possession. He also rooted for Mohamed Salah and Robert Lewandowski for winning the Ballon d'Or 2021. "There are a lot of players who can claim it. Like (Robert) Lewandowski, considering the number of goals he has scored and the way he weighs in matches. Recently, Mohamed Salah has also been unplayable. And obviously, as a Chelsea player, I'm going to name my club teammates like Jorgi (Jorginho), who won the Euro and the Champions League, as well as NG (N'Golo Kante), who is quite simply one of the best players in the world," he had said.

Lionel Messi's old teammate Gerard Pique has voted for the current PSG forward. This didn't come as a surprise to all of us. "The Ballon d'Or? If the winner is voted by the criteria, it's Messi. If they choose the best in the world, it's Messi too," he had said.

Luis Suarez's Lionel Messi's former teammate has also picked Messi as an ideal winner for the Ballon d'Or 2021. He pointed out that Messi has won the Copa America and also had been the highest score in La Liga 2020-21. "I think Leo deserves to be the Ballon d’Or because he has had a spectacular year on a personal level despite only winning the Copa del Rey with Barcelona," he said.

Ivan Rakitich has opted for Karim Benzema to be the winner for Ballon D'or 2021 primarily because he feels that the French footballer has emerged as a clear leader after the departure of Cristiano Ronaldo from Real Madrid. "What Karim has been doing for years is simply amazing! He's been at Real for so long… And yet he still scores as much! And often important goals!" he said.

Vinicius Junior who scored a goal last night also voted for his teammate Karim Benzema. During an interview, he said that by now he knows Karim Benzema in a better way now that they have played more games already. "I want to help him score many goals this season, and I hope he can win the Ballon d'Or," explained Vinicius.

Angel di Maria voted for his PSG teammate Lione Messi for winning the Ballon d'Or 2021. He further went on to say that Messi had an important year last year as he won the Copa dey Rey and Copa America last year.

Thomas Muller went on to say that Lewandowski has to win the Ballon d'Or 2021 for the kind of performances that are put up by him. "When you see what he's doing with the Polish national team - which is more difficult than in a real top team. I have to say there isn't one player who individually performed better. Lewy has to win the Ballon d’Or," he opined.

(The above story first appeared on LatestLY on Nov 29, 2021 05:09 PM IST. For more news and updates on politics, world, sports, entertainment and lifestyle, log on to our website latestly.com).