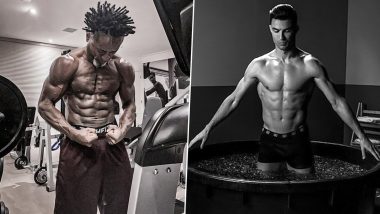 Former Brazilian footballer Ze Roberto has claimed he has a better physique than Cristiano Ronaldo which will raise a few eyebrows on social media considering how adored Cristiano is for his immense build. Cristiano Ronaldo may be 35 but thanks to his framework, he still runs more than anyone on the pitch or leaps several feet in the air to score a hat-trick. Football is all about having the right talent coupled with a body that does not age much in terms of core strength. Ze Roberto, who himself retired from professional football at the ripe age of 43 has been gaining a lot of prominence on Instagram with his workout video. Cristiano Ronaldo Flaunts his Well-Chiseled Body, Goes Sunbathing Ahead of Juventus vs Atalanta (See Pic).

Ze Roberto played for a lot of great clubs during his career like Real Madrid and Bayern Munich and people around the world still remember him for his breath-taking pace. The fact that he played till 43 makes Ze Roberto believe he has a better body than Cristiano Ronaldo and has confessed if the Juventus striker manages to play top flight football well into his forties, he will concede defeat and consider Cristiano Ronaldo to possess a better physique. Cristiano Ronaldo Flaunts his Abs During Self-Quarantine, Poses for a Photo With his Sisters.

Holidays with my family in France Riviera Enjoy the views 😀❤️👌🏻☀️⛴

Ze Roberto is currently a technical director at Palmeiras in Brazil where he played professionally till December 2017. Between 1995 and 2006, he made 85 appearances for the Selecao. He has won multiple trophies in Spain and Germany and was revered for his attacking skills.

(The above story first appeared on LatestLY on Aug 02, 2020 12:26 PM IST. For more news and updates on politics, world, sports, entertainment and lifestyle, log on to our website latestly.com).