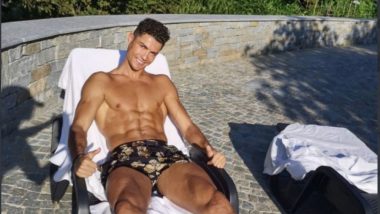 Cristiano Ronaldo has given us fitness goals over the years and is seen flaunting his well-chiselled body. This time things were no different with the five-time Ballon d’Or winner as he was seen letting his hair down ahead of Juventus vs Atalanta. The Portugal star was seen sunbathing at the backyard of his home in Turin. The five-time Ballon d'Or winner was all smiles as he posed for the snap. The caption of the snap read, "Recharging." The Juventus star has been enjoying a great run of a form at the Serie A 2019-20. Cristiano Ronaldo & Lionel Messi’s Names Left Out of Ballon d’Or 2020 Race by Robin van Persie.

Ronaldo has scored 26 goals in 27 Serie A 2019-20 appearances and has played a vital in helping Juventus in maintaining the top spot in the league. The last he was seen in action during Juventus' fixture against AC Milan where a goal by CR7 could not help the team as they lost the match by 4-2. Now, let's have a look at the picture shared by CR7 on his official Instagram handle.

Talking about the Serie A 2019-20 points table, the Bianconeri has 75 points in their kitty. The team has so far won 25 games out of 31. The Old Lady has lost six matches so far and the rest of them have ended with a draw. Lazio is placed on number two of the points table with 68 points.

(The above story first appeared on LatestLY on Jul 10, 2020 12:07 AM IST. For more news and updates on politics, world, sports, entertainment and lifestyle, log on to our website latestly.com).