Cagliari vs Juventus Head-to-Head Record: Ahead of Serie A 2019-20, Here Are Match Results of Last Five CAG vs JUV Football Games 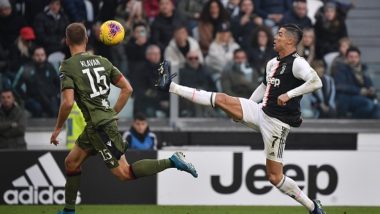 Juventus' Portuguese forward Cristiano Ronaldo (R) reaches out to the ball during the Italian Serie A football match Juventus vs Cagliari on January 6, 2020 at the Juventus Allianz stadium in Turin. (Photo Credits: Getty)

Cagliari is all set to take on the Serie A 2019-20 champion Juventus in its backyard.  Paulo Dybala has missed out on the bus to Sardegna Area due to a minor injury. In this article, we bring to you the head-to-head record of the two teams. Juventus and Cagliari have played against each other 26 times out of which Juventus obviously has an upper hand as they have beaten Cagliari for 19 times and five of them ended with a draw. Only on a couple of occasions that the Cagliari has beaten Juventus. Now, let's have a look at the last five occasions when Juventus met Cagliari: Juventus Announces 22-Member Squad For Serie A 2019-20 Game Against Cagliari; Paulo Dybala Out Due to Injury, Cristiano Ronaldo Chases Golden Boot Honour.

The two teams met in a reverse fixture at the Old Lady won the game 4-0 earlier this year. Cristiano Ronaldo scored a hat-trick with Gonzalo Higuain scoring the fourth goal of the match.

The last time the Bianconeri was hosted by Cagliari, the visitors won the game 0-2. Leonardo Bonucci and Moise Kean were the ones who scored the goals for the side. The hosts could not score a single goal in the match.

This was in November 2018, once again the hosts won the game 3-1. Paulo Dybala was the one who scored a goal. Filip Bradaric's own goal helped the Bianconeri reach 2-0. Juan Cuadrado was one who brought the team to 3-1.

The two teams met each other in January 2018 when Cristiano Ronaldo was still with Real Madrid. Fernando Bernardeschi was the only one who scored a goal and Juventus won the game by 0-1.

The Old Lady once again hosted the Cagliari in their own backyard and the team won the match 3-0. Mario Mandzukic, Paulo Dybala and Higuain were the ones who scored a goal for the hosts.

Talking about tonight, the match will begin at 1.15 am IST. Cristiano Ronaldo is currently chasing Ciro Immobile's record of 34 goals in Serie A 2019-20. The five-time Ballon d'Or winner currently has 31 goals in the Italian league.

(The above story first appeared on LatestLY on Jul 29, 2020 04:51 PM IST. For more news and updates on politics, world, sports, entertainment and lifestyle, log on to our website latestly.com).