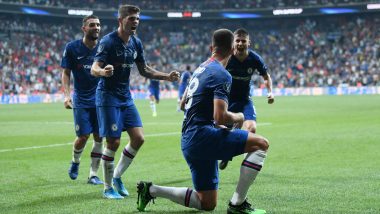 Chelsea vs Manchester City, Premier League 2019-20 Live Streaming: Chelsea face Manchester City at home looking to steer clear of a chasing pack led by Manchester United in the top four race. The Blues came back from a goal down against Aston Villa in their first game after an extended COVID break. With 51 points from 30 games, Frank Lampard’s men have done well for a young team and a transfer ban in place. Opponents Manchester City are in fine form at the moment but their peak will not have any impact on their fate as they are set to finish second. Chelsea versus Manchester City will be telecasted on Star Sports network and streamed live on Hotstar from 12:45 AM. CHE vs MCI Dream11 Prediction in Premier League 2019–20.

Reece James is likely to replace Marcos Alonso in the Chelsea starting line up tonight in order to cope with the menacing Raheem Sterling. Italian midfield maestro Jorginho is back after suspension and Ruben Loftus-Cheek could make way for him. Olivier Giroud scored the winner against Aston Villa and his tail will be up heading into this critical encounter. Brazilian winger Willian has not yet signed a new contract with Chelsea but should be starting this game. Christian Pulisic has a strong case for a start after a fine showing in the previous game. Olivier Giroud, Kevin De Bruyne and Other Players to Watch Out for Chelsea vs Manchester City Clash.

The loss of Sergio Aguero to a knee injury is a massive blow to Manchester City who will be sweating on the availability of their influential striker during the closing stages of the season. Eric Garcia, John Stones and Claudio Bravo are also a massive doubt for the fixture. Benjamin Mendy and Kyle Walker return as full-backs with playmaker Kevin de Bruyne back after rest. Gabriel Jesus will lead the Manchester City strike force and will keep the Chelsea defensive line on their toes.

How to Watch Live Telecast of Chelsea vs Manchester City, Premier League 2019-20 Football Match on TV?

(The above story first appeared on LatestLY on Jun 25, 2020 03:52 PM IST. For more news and updates on politics, world, sports, entertainment and lifestyle, log on to our website latestly.com).