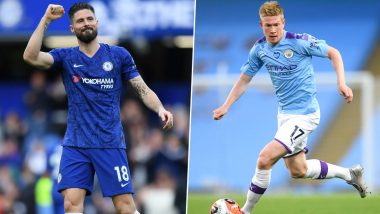 Chelsea will host Manchester City at Stamford Bridge on Thursday (June 25, 2020) as the teams look to move a step closer towards Champions League qualification for next season. Both sides are unbeaten since Premier League’s restart after the suspension and that record is on the line as the two heavyweights of English football collide. City are currently second in the league with the Blues occupying the fourth spot. Sergio Aguero Injury Update: Don’t Know When He Will Come Back and Join Us, Says Manchester City Manager Pep Guardiola.

Since the league’s restart, Pep Guardiola’s men have looked far from the side that has struggled to put on consistent performances this season, scoring eight goals in two games. However, they suffered a huge blow during their game against Burnley as top-scorer Sergio Aguero sustained an injury which is likely to keep him out for the entire season. This could take a toll on their attacking play but Gabriel Jesus is more than apt replacement and could easily trouble the Chelsea defence. CHE vs MCI Dream11 Prediction in Premier League 2019–20.

Similar to City, Chelsea have suffered from inconsistency this campaign but the break looks to have done a lot of for Frank Lampard and for his men. Ruben Loftus-Cheek returned after a long injury layoff and could play a vital role alongside the likes of Christian Pulisic and Mason Mount.

So ahead of this clash, we take a look at some of the players who could decide the eventual outcome of this game.

The Belgian international has been spectacular since football’s return, He put on a man of the match display against Arsenal scoring a goal and assisting another. He was given a rest for the Burnley game so he will be fresh and ready to go for this clash.

The American was crucial in the Blues’ previous game against Aston Villa as he scored the equaliser in their 2-1 win. Pulisic came on in the second half to change the game and he could be awarded a start by Frank Lampard. The 21-year-old’s linkup play with Mason Mount and Tammy Abraham will be crucial if Chelsea are to get the better of Pep Guardiola’s men.

The Algerian is only one of the two City players who have started both their games since the restart. Mahrez has been crucial in both the games, being involved in three goals, scoring twice and assisting once. The 29-year-old, for his form, could once again be preferred to Bernardo Silva by Pep as City look to consolidate second place.

The Frenchman has taken of Tammy Abraham’s absence since the restart and has scored in both games so far. He netted the winner against Villa and will be eager to continue that run against Manchester City. Giroud’s future has been a topic of much debate but for the time being, he looks completely focused at Chelsea.

(The above story first appeared on LatestLY on Jun 25, 2020 03:47 PM IST. For more news and updates on politics, world, sports, entertainment and lifestyle, log on to our website latestly.com).