Juventus won against AC Milan by 2-0 at the San Siro Stadium in Italy. With this win, Juventus maintained their number one position at the Serie A table with 34 points. 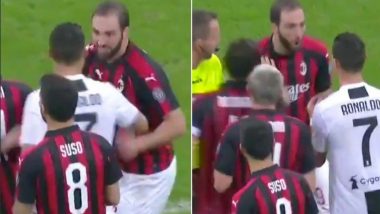 Juventus won against AC Milan by 2-0 at the San Siro Stadium in Italy. With this win, Juventus maintained their number one position at the Serie A table with 34 points. However, during the match, AC Milan’s Gonzalo Higuain was shown a red card for committing a foul against Juve defender Medhi Benatia after missing a penalty.  He also went on to vent out his anger at the match referee who showed him a red card and was quite animated while expressing his emotions. Ronaldo Keeps Juve Flying High with 'important' Win over AC Milan.

Cristiano Ronaldo, however, tried to intervene and asked Gonzalo Higuain to calm down. But the AC Milan footballer was not in the mood to keep quite a few seconds later walked off the field in tears. However, Higuain’s gesture did not annoy Ronaldo and he instead went on to defend the AC Milan footballer and said that it was quite understandable as their team was losing the match. “I told him to calm down, as he risked an even worse ban. He didn't do much, he was annoyed at losing the game. That's understandable. I hope he is not punished too severely,” said Ronaldo.

Check out the video of Ronaldo being pushed by Gonzalo Higuain.

After the match, Gonzalo Higuain went on to apologise to the fans of the club and said that the foul was totally uncalled for. Gonzalo Higuain also said that he did not insult anyone. “It seemed an unfair foul, I was fouled as far as I'm concerned. I was cautioned but I did not insult anyone. I apologised to the club, the fans, the coach and my companions because these episodes must be avoided,” said Higuain to a popular channel. Talking about the match, Mario Mandžukić and Ronaldo were the goal scorers for the match.

(The above story first appeared on LatestLY on Nov 12, 2018 04:55 PM IST. For more news and updates on politics, world, sports, entertainment and lifestyle, log on to our website latestly.com).