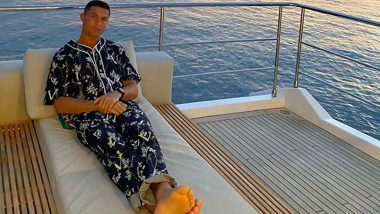 Cristiano Ronaldo has returned to action with Juventus in a recent friendly and looks all set to feature in their season opener. And before the new season footballing season begins in Italy, the five-time Ballon d’Or is enjoying some time off on his luxury yacht and recently shared a photo. The Portuguese footballer bought the yacht, which reportedly costs around $7 million, to celebrate his second Serie A title win. Cristiano Ronaldo Enjoys Timeout With Girlfriend Georgina Rodriguez and Kids in the Pool (View Pic).

The Juventus star’s future at the club was in doubt after their early Champions League exit at the hands of Lyon, but the five-time Ballon d’Or winner has decided to stay in Turin. The Italian side appointed Andrea Pirlo following Maurizio Sarri’s sacking and Cristiano Ronaldo is all set to take the field for the new manager. Before the new season starts, the Portuguese shared a picture of himself in stylish PJ's while admiring the sunset. Cristiano Ronaldo Reportedly Splurges £615K on Engagement Ring for Georgina Rodriguez, View Pics of The Happy Couple.

The former Real Madrid star took part in the pre-season training camp of Juventus and also played in a recent friendly against Novara at the club’s training centre. The five-time Ballon d’Or winner opened the scoring in a 5-0 Bianconeri win and looked sharp before being replaced by Douglas Costa in the second half.

Juventus begin their season against Sampdoria on September 20, 2020. The Bianconeri are the defending champions and have won the league for nine consecutive years and will be hopeful of adding another to their trophy cabinet. The Italian giants have added Arthur Melo from Barcelona and are hopeful of landing Luis Saurez.

Cristiano Ronaldo recently became only the second-ever footballer to reach 100 goals in international football with a brace against Sweden. The Portuguese took his tally to 101 goals in 165 appearances. Only Ali Daei has netted more goals for his national team that the five-time Ballon d’Or winner, with the former footballer netting 109 goals for Iran.

(The above story first appeared on LatestLY on Sep 15, 2020 09:39 AM IST. For more news and updates on politics, world, sports, entertainment and lifestyle, log on to our website latestly.com).