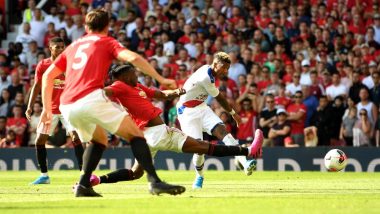 EPL Live Streaming Online in India: Manchester United fluffed their lines against Southampton in their last game which was a jolt to their European ambitions. Next up for the Red Devils is Crystal Palace in an away clash with the visitors needing all three points. Ole Gunnar Solskjaer’s men are tied with Leicester City on points currently, and only goal difference separates the two teams. It has been a season of missed opportunities for them as time, and again they mess up the chance to break into top four. Crystal Palace are a decent outfit at home and will give Manchester United a run for their money. CRY vs MUN Dream11 Prediction in Premier League 2019–20: Tips to Pick Best Team for Crystal Palace vs Manchester United Football Match.

Christian Benteke picked up a red card against Aston Villa and is suspended for Crystal Place in tonight’s game. Gary Cahill, James Tomkins and Jeffery Schlupp are on the treatment table and do not look like returning this season. Wilfred Zaha is the standout performer for the hosts, and Manchester United will do well to keep him quiet. Luka Milivojevic in the midfield is known for his high-intensity game, and with their defence not in best of forms, his role becomes critical.

Luke Shaw and Mason Greenwood are struggling to be fit in time to face Crystal Palace as the English duo battle swollen ankles. Brandon Williams who suffered a nasty head injury during the closing stages of the game against Southampton, has been declared fit to play. Paul Pogba and Bruno Fernandes had a poor outing in the last game and need to improve vastly if the Red Devils want to break into the top four.

Crystal Palace vs Manchester United clash in Premier League will be played at the Selhurst Park on July 17, 2020 (Thursday mid-night). The game has a scheduled timing of 12:45 am IST. Manchester United Transfer News Latest Update: Jadon Sancho, Jack Grealish and Three Other Players Who Could Join Red Devils This Summer.

How to Get Free Live Streaming of Crystal Palace vs Manchester United, Premier League 2019-20 Football Match?

Premier League 2019-20 can be viewed on Disney+ Hotstar, the official OTT platform of Star Sports. So fans can either download the Disney+ Hotstar app or log onto the website, ton watch the live streaming of Chelsea vs Norwich. With Anthony Martial and Marcus Rashford firing on all cylinders, Manchester United should get their three points at Selhurst Park but not before a resilient fight from the hosts.

(The above story first appeared on LatestLY on Jul 16, 2020 04:20 PM IST. For more news and updates on politics, world, sports, entertainment and lifestyle, log on to our website latestly.com).