Danilo Believes Juventus Still Needs Cristiano Ronaldo, Says ‘Having him in the team is important for us’ 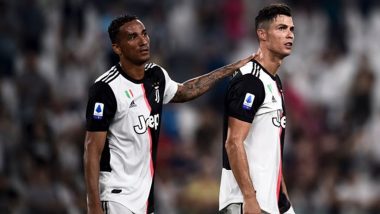 For days now it is said that Cristiano Ronaldo will be quitting Juventus in the upcoming season. His name is linked to Manchester United. for a long time now. It is also said that Cristiano Ronaldo is not looking to renew his contract the Bianconeri. However, Ronaldo's teammate Danilo has said that the team needs to have a player like him to ensure good results. In one of the interviews with a popular Sports website, Danilo explained that Ronaldo brings in a host of things along with him. 'Cristiano Ronaldo's Personal Interests Difficult to Manage' Says Maurizio Sarri Ahead of Serie A 2021-22.

He further insisted that Ronaldo is a dear friend and the two have known each other since their days together at Real Madrid. "Having him in the team is important for us because he brings an avalanche of goals, and besides, he’s a dear friend, we’ve known each other since Real Madrid. He’ll still be with us next season," he said during an interview. Cristiano Ronaldo is currently having a good time with his family after Portugal's ouster from the Euro 2020. He has been posted pictures of his holiday with his family on social media.

A couple of days ago, Maurizio Sarri had opened up about Ronaldo not being easy to handle. In an interview, he had said that Ronaldo's personal interests are difficult to manage as he a multinational man. He is also linked to PSG for now. It would be interesting to see where Ronaldo ends up.

(The above story first appeared on LatestLY on Jul 08, 2021 10:55 PM IST. For more news and updates on politics, world, sports, entertainment and lifestyle, log on to our website latestly.com).