Leicester needed to win to finish in the top four while a draw would have been enough for United. But despite being the better side, Leicester found themselves a goal behind when Jonny Evans and Wes Morgan tackled Anthony Martial with the latter through on goal. Evans received a booking with United also awarded a penalty. 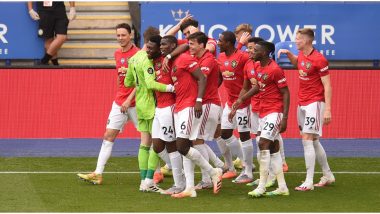 Manchester United finished third and secured Champions League football for next season with a 2-0 win over Leicester City in their final Premier League 2019-20 match at the King Power Stadium on Sunday. Bruno Fernandes put United ahead in the 71st minute from the spot before Jesse Lingard sealed the win after stealing the ball off Leicester City goalkeeper Kasper Schmeichel in 98th minute. The win on the final day in Premier League 2019-20 helped United pip, Chelsea, to the third position and also seal a Champions League berth for next season. ‘Luke Shaw Still Injured?’ Twitterati React As Manchester United Leave Out Left-Back for Leicester City Encounter.

United Fans went frenzy as soon as the whistle blew. Many took to Twitter to recount the hardship and criticism the players, manager Ole Gunnar Solskjaer and the club had to face in recent times over their performances. Leicester City looked the better for most of the first half and came close to scoring in the second half when Jamie Vardy struck the bar with a free-kick just outside the United penalty box. Manchester United, Leicester City Fans Troll Each Other Ahead of Crucial Premier League 2019–20 Match (See Reactions).

Leicester needed to win to finish in the top four while a draw would have been enough for United. But despite being the better side, Leicester found themselves a goal behind when Jonny Evans and Wes Morgan tackled Anthony Martial with the latter through on goal. Evans was deemed to have fouled and received a booking with United also awarded a penalty from which Fernandes put the visitors 1-0 ahead.

MUFC 15 points behind Leicester in Feb. Finish season third ahead of them. Significant improvement in second half of season. Team needs more quality, but that's a big win. Onwards with Ole.

Now that the @premierleague 19/20 is finally over, I want to take this chance to thank the @ManUtd players and club staff for their hard work throughout the season. There were many ups and downs, but we managed to end our season in the 3rd place. Well done everyone! #MUFC #LEIMUN pic.twitter.com/gOLjkQgGfj

That was Manchester United's 1⃣4⃣th penalty of the season, a new Premier League record...👀

⚽️ Man Utd have now been awarded a record 14 penalties in a PL season. Having missed 4 of the first 6, they have scored each of the last 8 (Bruno Fernandes scoring all 4 of his PL penalties) pic.twitter.com/7kUg6B7iDG

Brendan Rodgers responded with three attacking substitutions and Leicester piled the United box with numerous opportunities but failed to break their deadlock. Then with the game heading into additional time, Evans was shown a red for a high boot on Scott McTominay.

But things were about to get worse for the home team. With just second remaining, goalkeeper Kasper Schmeichel attempted to play the ball from the back but lost it to Lingard, who scored and sealed the win. it was Lingard’s first Premier League goal this season. Leicester dropped to fifth and will be playing the Europa League next season.

(The above story first appeared on LatestLY on Jul 27, 2020 12:26 AM IST. For more news and updates on politics, world, sports, entertainment and lifestyle, log on to our website latestly.com).