England vs Germany, UEFA Euro 2020 Live Streaming Online & Match Time in IST: How to Get Live Telecast of ENG vs GER on TV & Free Football Score Updates in India

England vs Germany Euro 2020 match will be played on June 28, 2021 (Monday) at the Wembley Stadium in London. The match is scheduled to start at 09:30 pm IST (Indian Standard Time). 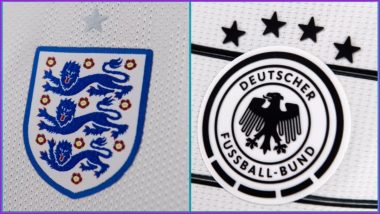 England renew their rivalry with Germany in international football when the two giants meet in London for the Euro 2020 round of 16 tie. The Three Lions finished top of their group with wins over Croatia and Czech Republic. Their defence has been on top in particular as they are the only team not to have conceded a goal in the tournament. There are issues to content with though with the attacking players struggling to gel together. Opponents Germany needed a last gasp goal from midfielder Leon Gortezka against Hungary to book their place in the next round. They are a quality team though who can defeat anyone on their day. Euro 2020 Day 19 Schedule: Today's Matches With Kick-Off Time in IST, Upcoming Fixtures and Live Streaming Details Of Round of 16 Fixtures.

There have been calls for Jadon Sancho to start against Germany but manager Gareth Southgate will likely resist this option. The returning Mason Mount replaces Jack Grealish as the no 10, playing off Harry Kane. Declan Rice and Kalvin Phillips have been brilliant in midfield and there is no looking past the duo for the central defensive role. Raheem Sterling is the only player to find the back of the net so far and assumes greater significance in the playing eleven.

Germany will go with the tired and tested 3-4-3 formation with Thomas Mullers as the false nine and Kai Havertz and Serge Gnabry as the two wide men. Toni Kroos and Ilkay Gundogan lack pace in midfield but Joachim Loew will likely stick with the two midfielders with Leon Goretzka coming off the bench. Joshua Kimmich has looked good on the right and will look to carve out openings if afforded space on the wings.

When is England vs Germany , UEFA EURO 2020 Match? Date, Time and Venue Details

Sony Pictures Networks India is the official broadcaster of UEFA EURO 2020 in India. It will broadcast England vs Germany , live match on Sony Ten 2 in English, Sony Ten 3 in Hindi, Sony Ten 4 in Tamil and Telugu, Sony Six in Bengali and Malayalam.

The live online streaming of England vs Germany , UEFA EURO 2020 football match will be available on the SONY LIV app and website. JIO will also provide the online streaming of the game for its users on the JIO TV app. England have a poor record against Germany when it comes to major tournaments and the Germans look like progressing to the quarters at the expense of the Three Lions.

(The above story first appeared on LatestLY on Jun 29, 2021 04:22 PM IST. For more news and updates on politics, world, sports, entertainment and lifestyle, log on to our website latestly.com).