The Indian Super League 2018-19 today offers a mouth-watering contest between FC Pune and ATK which will be held at Shree Shiv Chhatrapati Sports Complex in Pune. 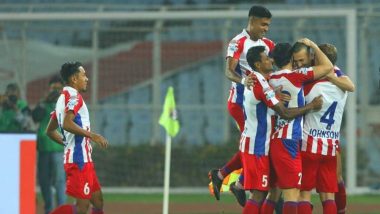 The Indian Super League 2018-19 today offers a mouth-watering contest between FC Pune and ATK which will be held at Shree Shiv Chhatrapati Sports Complex in Pune. Both teams eye for a berth in the playoffs and the match will be no less than a tug of war. Atletico de Kolkata is placed on number six of the ISL 2018-19 points table with 20 points. Whereas, Pune City occupies the seventh spot with 14 points. Talking about the head-to-head record between both teams, Pune holds an upper hand over ATK.

Out of the nine matches played between both teams, Pune City has won five games and a couple of them ended with a draw. Pune City has scored 15 goals from the nine games and ATK has scored 9. Pune City hired a new coach Phil Brown and won their first game against Chennaiyin FC by 2-1 after their winter break. The team had a bad start to the ISL 2019 season but picked up as the tournament proceeded.  The team is on a three-match winning streak and would want to put their best foot forward for the game. With 13 points their kitty, the team will look to acquire maximum points to confirm their berth for the playoffs.

On the other hand, if ATK wins the match they will still be relevant to in the tournament. Manuel Lanzarote, who has played a vital role in ATK will be the man to watch out for. Now, let’s check out the live streaming details of the game.

The 74th match of Indian Super League (ISL) Season 5 will be between FC Pune City and  ATK on February 10, i.e. Sunday. The contest will be played at the Shree Shiv Chhatrapati Sports Complex in Pune, and is scheduled to begin at 7.30 PM (IST).

Where to Watch the Live Telecast of FC Pune City vs ATK, Hero ISL 2018–19, Football Match?

(The above story first appeared on LatestLY on Feb 10, 2019 06:30 PM IST. For more news and updates on politics, world, sports, entertainment and lifestyle, log on to our website latestly.com).