Following their triumph in Euro 2020, the Italian national team took to the streets of Rome to celebrate the trophy with the fans with an open bus parade. However, Matteo Piantedosi, the prefect of Rome has revealed that the celebrations were not authorised amid the COVID-19 pandemic. 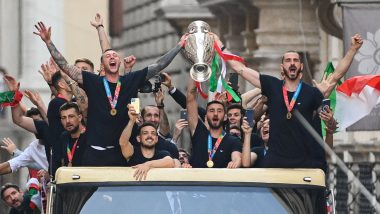 Italy created history at the Euro 2020 finals as Roberto Manchini’s men defeated England to end their 53-year-wait in the European Championships. Following their triumph, the Azzurri took to the streets of Rome to celebrate the trophy with the fans with an open bus parade. However, Matteo Piantedosi, the prefect of Rome has revealed that the celebrations were not authorised amid the COVID-19 pandemic. From Failing to Qualify for 2018 World Cup to Winning Euro 2020, Here’s How Italy Wrote Their Comeback Story.

Italy reached their first Euro final since the 2012 defeat to Spain but this time were on the positive side of the things as they defeated England on penalties following the game finishing 1-1 in regular and after extra time. Bukayo Saka’s decisive penalty was saved by Gianluigi Donnarumma as Italy won a second European Championship in their history. Italy Win Euro 2020 After Beating England 3-2 on Penalties in Final.

Rome prefect Piantedosi, in an interview with Corriere della Sera, said that the Italian federation were denied permission for an open bus parade but they went ahead either way. ‘We had denied permission to celebrate Italy's victory in the European Championships on the open bus, but the pacts were not respected,’ he said.

'Last Friday we convened a committee for order and security. The meeting was precisely to decide what to do and for this reason, we also directly involved the FIGC, which asked to allow the athletes of the national team to take a ride around Rome on an open bus, but it was clearly explained that it was not possible. We said we could not authorize them,’ he added.

However, Piantedosi further explained that the Italian authorities reluctantly allowed the parade to go ahead in order to avoid any public disorder, as thousands of fans had turned up to see the team with the piece of silverware.

‘It was the strong intention of the players to continue the celebrations by taking a ride on an open bus. There were thousands of people waiting for the bus ride, banning it could have created problems of public order. In Rome, we have always tried to apply the measures anti-Covid by stimulating the collaboration of citizens and productive categories rather than imposing draconian measures.’ He added.

(The above story first appeared on LatestLY on Jul 14, 2021 04:17 PM IST. For more news and updates on politics, world, sports, entertainment and lifestyle, log on to our website latestly.com).