Liverpool Manager Jurgen Klopp has been named the Premier League manager of the season for 2021-22. 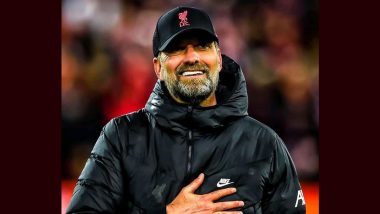 London, May 25 : Liverpool boss Jurgen Klopp has been named the Premier League manager of the season for 2021/22. The 54-year-old German helped ensure one of the best title races in history went down to the final minutes of the campaign as his Liverpool team pushed Manchester City all the way. Liverpool were 14 points behind Man City in January but won 16 and drew two of their remaining matches to finish on 92 points, losing fewer matches, two, than any other team across the campaign. Robert Lewandowski Transfer News: Bayern Munich Ready To Sell As Barcelona Agree Personal Terms With Striker.

In beating Wolverhampton Wanderers 3-1 on May 22, Liverpool went the entire season unbeaten at home, doing so for a joint-record fifth time in the Premier League. But it could not ensure the Premier League title for Klopp's men, who finished just one point behind Pep Guardiola's Man City. Klopp wins the award for a second time, having also claimed it in 2019/20 after steering Liverpool to their first Premier League title. Neymar Jr Transfer News: PSG Ready To Sell Brazilian Star in the Summer.

The 54-year-old won after votes from the public were combined with those of a panel of football experts to decide who would top a five-man shortlist, according to a statement on premierleague.com. The German will now hope to end the campaign on a high when Liverpool face Real Madrid in the UEFA Champions League final on May 29 with a chance to claim a treble, adding to their EFL Cup and FA Cup wins this season.

(The above story first appeared on LatestLY on May 25, 2022 03:31 PM IST. For more news and updates on politics, world, sports, entertainment and lifestyle, log on to our website latestly.com).