Mumbai City FC finished fifth last season missing out on a final four berth due to the defeat against Chennaiyin FC in their final game. Despite signing some marquee names, Mumbai City FC have failed to reach the final even once. The Islanders have made some great signings this season and will be rearing to win their maiden ISL title. 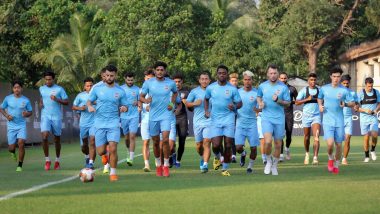 Mumbai City FC will aim for their maiden Indian Super League (ISL) title when they begin their ISL 2020-21 season against NorthEast United on November 21 (Saturday). The Islanders have faced disappointment more than success in the history of ISL and have made the ISL knockouts only twice in six seasons. But the rebranding and a change in coach have brought expectations of a new dawn for the club. They have also signed a number of top stars and are among the heavyweights this seasons in ISL 7. Their coach Sergio Lobera is one of the most loved and successful coaches in ISL and will hope to rub off that on his boys. ISL 2020-21 Full Schedule For Free PDF Download Online: Time Table With Date & Match Time In IST, Venue Details, Fixtures of Indian Super League 7.

The Islanders finished fifth last season missing out on a final four berth due to the defeat against Chennaiyin FC in their final game. Despite signing some marquee names from around the world, Mumbai City FC have failed to reach the final even once. In Sergio Lobera though they have a proven coach, who led Goa to the final two seasons ago and made them one of the best teams in the ISL. Mumbai have also gone all-out in the transfer market and signed two of the league’s biggest players in Bartholomew Ogbeche and Adam Le Fondre. ISL 2020–21: Mumbai City FC Head Coach Sergio Lobera Says ‘Will Focus on Improving Indian Players’.

Those two aside, Lobera has also brought Hugo Boumous, Ahmed Jahouh, Mandar Rao Desai and Mourtada Fall from Goa with him. Boumous, Most Valuable Player of the Season last ISL, will be among the players to watch out for. The team have some of the best Indian recruits in their arsenal with goalkeeper Amrinder Singh, Sarthak Golui, Raynier Fernandes among the top domestic names.

Hugo Boumous, Adam le Fondre, Amrinder Singh, Bartholomew Ogbeche, Mandar Rao Desai, Farukh Choudhary and Raynier Fernandes are some of the top names in the Mumbai City FC squad and will be key to their season in ISL 2020-21.

Mumbai City have played 100 matches in Indian Super League history and have won and lost 38 matches each while also drawing 24 games. The Islanders have scored 123 goals and conceded 142 times and reached the playoffs twice in six seasons.

Mumbai City Most Goals and Appearances

Goalkeeper Amrinder Singh is the most capped player for Mumbai City FC with 61 appearances while Modou Sougou is the club’s leading goalscorer with 15 goals in 32 matches.

(The above story first appeared on LatestLY on Nov 18, 2020 06:19 PM IST. For more news and updates on politics, world, sports, entertainment and lifestyle, log on to our website latestly.com).