Norwich City vs Manchester United, FA Cup 2019-20: Odion Ighalo, Jesse Lingard and Others Players to Watch Out in NOR vs MUN Football Match 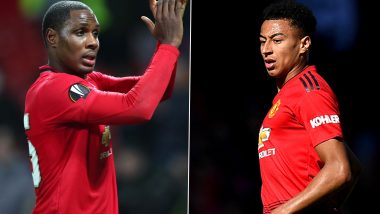 Manchester United will resume their FA Cup 2019-20 campaign when they take on Norwich City in the quarter-finals of the tournament. The match will be played at Carrow Road on June 27, 2020 (Saturday). Both teams have had contrasting starts since football’s restart from coronavirus suspension, as Ole Gunnar Solskjaer’s men are unbeaten while Daniel Farke’s team has suffered two defeats in the bounce. NOR vs MUN Dream11 Prediction in FA Cup 2019–20.

Both teams have a lot to fight for in the Premier League but the focus will now shift towards the knockout tournament as silverware is on the line. Matches are coming thick and fast due to the delay caused by the pandemic, so both teams are expected to make a number of changes in the team which took the field during the mid-week games. Jesse Lingard Transfer News Latest Update: Manchester United Manager Ole Gunnar Solskjaer Insists Midfielder Must Show Form to Extend Stay at Old Trafford.

Daniel Farke rested Teemu Pukki and Todd Cantwell in the 1-0 defeat against Everton, which indicates that the duo will feature tonight as Norwich have hops of causing an upset. Meanwhile, the likes of Odion Ighalo and Brandon Williams are expected to feature for United and they will be eager to impress. So ahead of this clash we take a look at some of the key players.

After a blistering start to his Premier League career, the Finnish international has gone off the boil in recent times. However, the 30-year-old still poses a great threat in front of the goals and with united likely to tinker with their defence, Pukki might be able to cause problems.

The former Nigerian star extended his stay at United until the end of the season and will be hoping to make a claim for starting spot in the next EPL game. The 31-year-old has scored four goals in as many starts for United and will be looking to add to his tally.

The English midfielder has been one of the brightest sparks for Norwich in an underwhelming season. After being rested midweek, Cantwell is expected to start this game and will be looking cause problems for United defence. The 22-year-old has managed six goals so far in the season.

With the rise of Bruno Fernandes and Mason Greenwood, Jesse Lingard has become a forgotten name at Old Trafford. But the England international will have a chance to show Ole Gunnar Solskjaer what he is capable of and make his way back into the first team.

(The above story first appeared on LatestLY on Jun 27, 2020 03:11 PM IST. For more news and updates on politics, world, sports, entertainment and lifestyle, log on to our website latestly.com).