The FIFA Men’s Player of the Year 2020 awards was declared last night. Bayern Munich’s Robert Lewandowski defeated Cristiano Ronaldo and Lionel Messi to walk away with the gong. The awards are given on the basis of the votes of the coaches and the players. 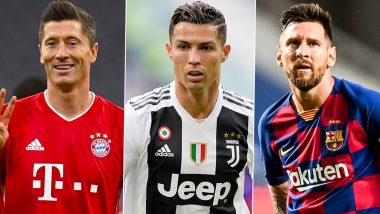 In the Best Coach category, the German striker voted for Hans-Dieter Flick, Jurgen Klopp and  Leed's United Marcelo Bielsa. Klopp went on to win the gong as he added the Premier League 2020-21 trophy. Check out the full list of winners below:

Bayern Munich also flaunted the pictures of their striker winning the award. The ceremony was held behind closed doors due to the COVID-19 pandemic.

(The above story first appeared on LatestLY on Dec 18, 2020 10:10 PM IST. For more news and updates on politics, world, sports, entertainment and lifestyle, log on to our website latestly.com).