Ramos left the Spanish giants after 16 long years where he had quite a successful time and on becoming a free agent, decided to join Neymar in the Ligue 1. 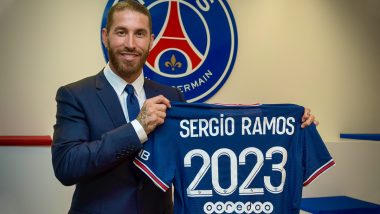 Spain defender Sergio Ramos on Saturday, revealed that it was Neymar, who convinced him to sign for Paris Saint-Germain after leaving Real Madrid. Ramos left the Spanish giants after 16 long years where he had quite a successful time and on becoming a free agent, decided to join Neymar in the Ligue 1. This seems to be bit of surprise, keeping in mind the fact that these two players clashed against each other in Spain during the El Clasico. Neymar, who played for Barcelona from 2013 to 2017 was one of the key players in the Catalan club and such matches involving a lot of rivalry and fierce competition. Ramos, while speaking to the media, said, "Neymar convinced me before signing for PSG. Before signing for a new club, it is always helpful to talk with several players, or with Leonardo or Al-Khelaifi. They all convinced me in their own way."PSG Announce Signing Of Sergio Ramos On Free Transfer

The 35-year old further added that he and Neymar always had a good relationship despite playing for rival clubs and getting involved in heated on-field clashes. "I have been talking to Neymar for six or seven years...Despite the fact he played for Barca and I played for Madrid, we have always had an extraordinary friendship," he said.

Despite being one of Europe's top clubs, PSG are yet to taste Champions League success, with them reaching the finals of the 2019-2020 season, only to be defeated by Bayern Munich. Ramos, a seasoned centre-back and a former Champions League winner, added that it would be 'historic' if he could win it with PSG.

"To come to a club that is 51 years old and has not won the Champions League, it would be historic to do so. And from a personal point of view, having a fifth Champions League would be very important," he said. Ramos, who was left out of Spain's Euro 2020 squad hoped that Kylian Mbappe would stay back in Paris. Mbappe has been on the list of new signings for Real Madrid for a long time. "I advise him to stay at PSG,' he said. 'I am nobody to decide the future of Kylian but I want him to stay. You have to have the best players and Kylian is one of them, like Neymar. Three of us can do great things."

(The above story first appeared on LatestLY on Jul 18, 2021 04:54 PM IST. For more news and updates on politics, world, sports, entertainment and lifestyle, log on to our website latestly.com).