Tottenham Hotspur vs Arsenal, Premier League 2019–20: Harry Kane, Pierre-Emerick Aubameyang and Other Players to Watch Out in TOT vs ARS Football Match 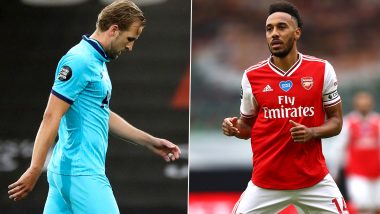 Tottenham Hotspur will take on local rivals Arsenal in the latest Premier League 2019-20 fixture. The match will be played at the Tottenham Hotspur on July 12, 2020 (Sunday). Just one point separates the two teams in the league table as they are chasing Europa League qualification. But a failure to win tonight could possibly end the chances of playing in Europe next season. Tottenham Hotspur vs Arsenal Head-to-Head Record.

Both teams have put on a decent run of results in the league post lockdown but they come into this clash in contrasting forms. Spurs have won just once in their last three games and have been far from their best. Jose Mourinho’s side looked lacklustre in front of the goal but a derby might just inspire them to give their best and get their form back. Tottenham Hotspur vs Arsenal, Premier League 2019-20 Free Live Streaming Online & Match Time in India.

Arsenal, on the other hand, have recovered from the early setbacks they suffered against City and Brighton and have gone unbeaten in five consecutive games. Mikel Arteta has got his side on the same wavelength and look a far bigger threat than they were a few weeks ago. So ahead of the 200th North-London derby, we take a look at the players who could have a huge impact on the final result.

Harry Kane’s lack of goals in recent fixtures has coincided with Tottenham’s drop in form. The Englishman scored in the 3-1 defeat against Sheffield but looked far from his best in the next two games. The Spurs forwards has a good record against Arsenal, so this match will be a good opportunity for him to get his goal-scoring touch back.

The Gabon international is second in the list of league’s top scorers and will be looking to add to his tally against their arch-rivals. Aubameyang has netted thrice in the last three games and will be hopeful of cutting the gap between him and Jamie Vardy.

The midfielder on-loan from Real Madrid has established himself as one of the most important part of the Arsenal squad in their resurrection under Mikel Arteta. The Spaniard plays a crucial in role in controlling the game from the middle of the park and needs to be at his best if the Gunners are to get a win in this clash.

The South Korean has found goals hard to come by since football’s restart from coronavirus suspension. Son is on an eight-game goal drought and will be looking to end that dismal run tonight. His partnership up top with Harry Kane will be a crucial factor in deciding the outcome of the game.

(The above story first appeared on LatestLY on Jul 12, 2020 06:19 PM IST. For more news and updates on politics, world, sports, entertainment and lifestyle, log on to our website latestly.com).