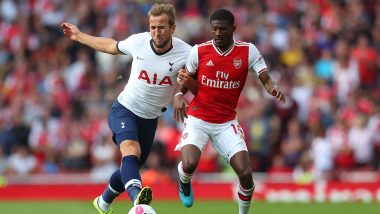 Tottenham Hotspur will host Arsenal for the 200th North London Derby as the two heavyweights meet each other in the latest Premier League fixture. The game will be played at Tottenham Hotspur Stadium on July 12, 2020 (Sunday). Gunners have the upper hand in the overall head-to-head record with 82 wins to Spurs’ 64. The remaining 53 clashed between the two sides have ended in a draw. TOT vs ARS Dream11 Prediction in Premier League 2019–20.

The two teams played out a thrilling 2-2 earlier in the season at the Emirates Stadium but things are very different for both the sides since that meeting. New managers are at the helm for the two eternal rivals as Jose Mourinho has succeeded Mauricio Pochettino in Spurs dugout while Mikel Arteta is the Gunners’ third manager, after Unai Emery and Freddie Ljungberg. Arsenal Forward Gabriel Martinelli Signs New Long-Term Deal.

The two teams come into this game in decent form, with Arsenal playing slightly better than their rivals. Mikel Arteta's men are unbeaten since the defeat against Brighton while Tottenham have lost just once in five games, but have been far from convincing. So as the two teams meet with local pride and European qualification on the line, we take a look at the results of the last five games between them.

A tale of two halves. Tottenham Hotspur took a 2-0 courtesy of goals from Christan Eriksen and Harry Kane but Alexander Lacazette’s goal right on half-time got the gunners back into the game. On the 71st minute, Aubameyang scored to complete a dramatic comeback.

Arsenal got off to a brilliant start as Aaron Ramsey put the Gunners ahead after just 16 minutes into the game. However, Spurs progressed more into the match and finally got their reward as Harry Kane found the back of the net with 15 minutes left to give his side an equal share of points.

Another match in which Arsenal dug deep and came back to get a result which seemed lost at one point. Harry Kane and Eric Dier’s strike, either side of Aubemayang’s strike gave Spurs a 2-1 lead but the Gabon international’s second on the night brought the game on level terms. Alex Lacazette and Lucas Torreira then scored a goal each in three-minute interval to give their side a crucial win.

The first half ended on level terms but Spurs came with extra motivation in the second period and their dominance was immediately visible as Harry Cane put them ahead on 49th minute. Arsenal pressed hard for an equaliser but were unable to breach the Tottenham back-line.

Spurs dominated the possession stats but it was Arsenal who has the goals and the much-needed win. Shkodran Mustafi opened the scoring and Alexis Sanchez doubled the Gunners’ lead which was enough to give them all three points.

(The above story first appeared on LatestLY on Jul 12, 2020 04:49 PM IST. For more news and updates on politics, world, sports, entertainment and lifestyle, log on to our website latestly.com).