Virgil van Dijk Warns Liverpool Opponents Ahead of Their EPL 2019-20 Restart, Says ‘With Two Wins, We Will Be Champions; but It Doesn’t Stop There’ 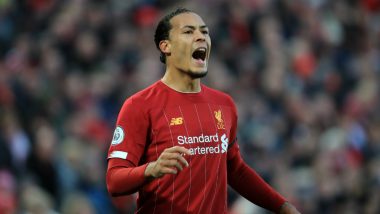 Liverpool might just need a couple of wins to walk away with the title but that does not stop them from chasing excellence and would be aiming to win all the remaining ones. Virgil van Dijk has revealed the plans of the Reds and during an interview, he went on to say that they would win all the remaining games and wish to take the form in the next season as well. The Reds will battle it out against the Everton in the night and they will have the luxury of playing the full squad. Liverpool is just six points away from winning their first EPL title in 30 years. Everton vs Liverpool, EPL 2020: Check Out Predicted Line-Ups for EVE vs LIV at Goodison Park

During an interview with Daily Mail, van Dijk said that they would want to win nine games to set the tone for the upcoming season and they aim to start the season in a similar fashion as that will be starting very quickly. "We can be a team that can keep progressing. We have players who can progress and make big steps in their development. Winning the league would be a big experience that could take us to the next level," he said in an interview.

Team Liverpool has no major injury concerns apart from Xherdan Shaqiri for the match at the Goodison Park.. Mohamed Salah and Andy Robertson have made a comeback into the squad. This has surely left all the fans beaming from ear-to-ear. They were seen participating in the team activities for the entire time.

(The above story first appeared on LatestLY on Jun 21, 2020 07:25 PM IST. For more news and updates on politics, world, sports, entertainment and lifestyle, log on to our website latestly.com).