Zlatan Ibrahimovic Gets Emotional on Sweden Return After Four Years, Breaks Down in Tears When Asked About Family’s Reaction (Watch Video)

Zlatan Ibrahimovic got emotional when a reporter asked him about his two sons' reaction o his return to the Sweden national team after four years. Ibrahimovic retired from the international stage after Euro 2016 but has been recalled to the national side for the World Cup qualifiers against Kosovo and Georgia. 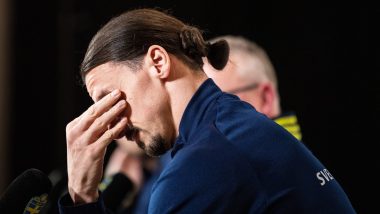 An emotional Zlatan Ibrahimovic could not hide his tears after making his return to the Sweden national team after a four-year absence. Ibrahimovic, who will turn 40 this October, was recalled into the Swedish national team for the World Cup qualifiers against Kosovo and Georgia as well as the international friendly against Estonia. Ibrahimovic choked when a reporter asked him what his sons, Maximilian and Vincent, thought of his decision to answer the country’s call and return back to the international stage. The striker got emotional when talking about the difficulty of leaving his family to join the national team. Luis Suarez Shares a Heart-Felt Note After Reaching 500 Career Goal Landmark.

“Zlatan, to go back to a question about your family. How did the family react when you decided to make a comeback to the national team? What did you say to your sons?” a reporter asked the AC Milan striker. Maximilian, 14, is Ibrahimovic’s eldest son while the youngest son Vincent is 12-year-old.  Lionel Messi Becomes Barcelona's Highest Appearance Maker: A Look At Argentine's Other Records At the Catalan Club.

The Return of God!!

“That’s not a good question you’re asking. I had Vincent here who really cried when I left him,” said Ibrahimovic responding to the question before breaking into tears. "This (time with the national team) takes time away from my family and it's not an easy thing. If you have two kids crying every time you leave them, it's a bit hard. I'm human, even though I'm Superman. They are very proud,” he said recomposing himself. Take a look at the video.

Ibrahimovic is Sweden’s all-time record goalscorer with 62 goals in 116 appearances. He was excited to return to the national team and said he was proud of himself. "To play in the national team is the biggest thing you can do as a football player, and as I was following them (Sweden), inside me I was feeling I think I can help them, I think I can do something," he said. Ibrahimovic has retired from international football after Euro’s 2016.

(The above story first appeared on LatestLY on Mar 23, 2021 02:13 PM IST. For more news and updates on politics, world, sports, entertainment and lifestyle, log on to our website latestly.com).