Zlatan Ibrahimovic Returns to AC Milan Group Training For the First Time After his Injury, Could Play the Game Against SPAL 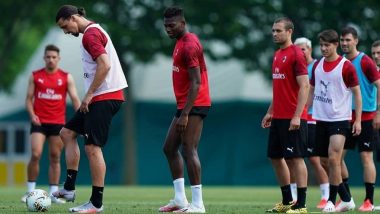 Good news for all the fans of AC Milan as Zlatan Ibrahimovic has returned to the practice session. The former LA Galaxy striker had been injured during the training session of AC Milan and had flown to Sweden. But now is back and he could be included in the squad for the game against SPAL which will be held on July 2, 2020. Zlatan took to social media and shared the picture of himself on social media where he was seen practising with his teammates. This piece of news has surely brought smiles on the faces of the fans. Zlatan Ibrahimovic Reportedly Has Heated Confrontation With AC Milan CEO Ivan Gazidis Ahead of Coppa Italia 2019-20 Semi-Final, Slams Him For Being Distant.

As AC Milan played against Roma last night, Zlatan was not included in the squad. The team had won the game 2-0.  Ahead of the game yesterday, Stefano Pioli had said that Zlatan had recovered fully but was not yet ready to play the game. “He worked a lot, he worked well, he did his first training yesterday but he isn’t ready to play yet. Tomorrow, he will work and he won’t be on the bench with us," said the AC Milan manager ahead of the match against Roma. Now, let's have a look at the snap posted by Zlatan.

God and his students

Zlatan's future at AC Milan is still unknown. Now very long ago, Zlatan had a heated confrontation with club CEO Ivan Gazidis before the Coppa Italia semi-finals against Juventus. The former Manchester United player had slammed Gazidis for being distant.

(The above story first appeared on LatestLY on Jun 29, 2020 09:50 AM IST. For more news and updates on politics, world, sports, entertainment and lifestyle, log on to our website latestly.com).