Pictures on social media which surfaced on Sunday showed that the hockey stick and the ball has been missing from the statue of the Pakistan hockey legend, two weeks after the statue was installed. 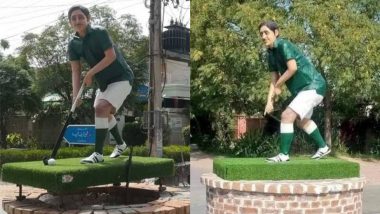 Pakistan hockey legend Samiullah Khan has had parts of his statue stolen in Bahawalpur, according to social media posts on Sunday. Two weeks ago, the statue was installed in his hometown to pay tribute to the hockey great  who was popularly known as the 'Flying Horse' for his menacing runs in the left-wing. The ball and the hockey stick from the statue is missing as in seen in the picture below. India at the Olympic Games Part 4, 1928 Amsterdam: India Wins Its First Olympic Medal in Field Hockey

Some thief’s stole ball and hockey from the statue of Hockey hero Samiullah khan in Lahore pic.twitter.com/aFE8cSOhRR

Hockey fans in Pakistan were disappointed with this development. A fan wrote, "Let’s see for how long his shoes and socks survive." Khan enjoyed a trophy-laden career for the Pakistan hockey team from from 1973 to 1982. He won two FIH World Cups in 1978 and 1982, bagged the Asian Games gold medals in the years 1974, 1978 and 1982 and also won a silver medal for his country in the 1975 World Cup.

Besides these, he has 55 goals to his name in international hockey, which include 12 in World Cups. He also made a solitary appearance at the 1976 Olympics, winning the bronze medal for Pakistan in the event.

(The above story first appeared on LatestLY on Jul 19, 2021 01:55 PM IST. For more news and updates on politics, world, sports, entertainment and lifestyle, log on to our website latestly.com).