At Amsterdam in 1928, India won their first ever gold medal in field hockey. They won all five of their matches, scored 29 goals, and did not concede a single one. 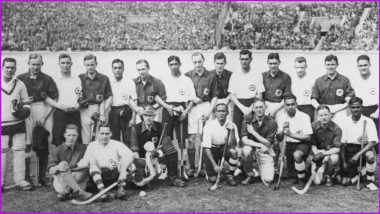 The year 1928 is important in Indian history for more reason than one. This was when newly formed Indian Olympic Committee sent a field hockey team for the first time to the Olympics, in Amsterdam. The team won their first ever gold medal. Later that year, the BCCI would be formed in Roshanara Club, Delhi, and the Indian journey in sport would take off. India at the Olympic Games Part 1, 1900 Paris: Norman Pritchard, India's First-Ever Olympian.

Nine teams participated in hockey that year. Barring India, all others were European. Great Britain was not among them. In fact, Great Britain never sent a team for field hockey until India became an independent nation.

India were led by Jaipal Singh Munda. Not only did they win all five of their matches, but they annihilated every opposition. They scored 29 goals in the tournament and did not concede a single one. Dhyan Chand alone scored 14 of these. India at the Olympic Games Part 2, 1920 Antwerp: India's First Official Contingent at Summer Games.

Among others, Feroze Khan scored five goals in a single match, against Belgium. And Iftikhar Ali Khan, then the Nawab of Pataudi, did not play any of the matches, but later went on to play for England, and lead India, in Test cricket.

In the league stage, they beat Austria 6-0, Belgium 9-0, Denmark 5-0, and Switzerland 6-0. In the final, they beat hosts Netherlands 3-0. Only three people had seen off the Indian contingent at the Bombay harbour when they had left. Thousands waited for them when they returned. India would continue to win the gold medal at field hockey until 1956. India at the Olympic Games Part 3, 1924 Paris: Formation of All-India Olympic Committee.

India also sent seven representatives – all male – at the track and field that year. None of the runners made it past the quarter-finals. Dalip Singh, too, came 37th in the long jump qualification and did not qualify for the final.

(The above story first appeared on LatestLY on Jul 19, 2021 12:07 AM IST. For more news and updates on politics, world, sports, entertainment and lifestyle, log on to our website latestly.com).