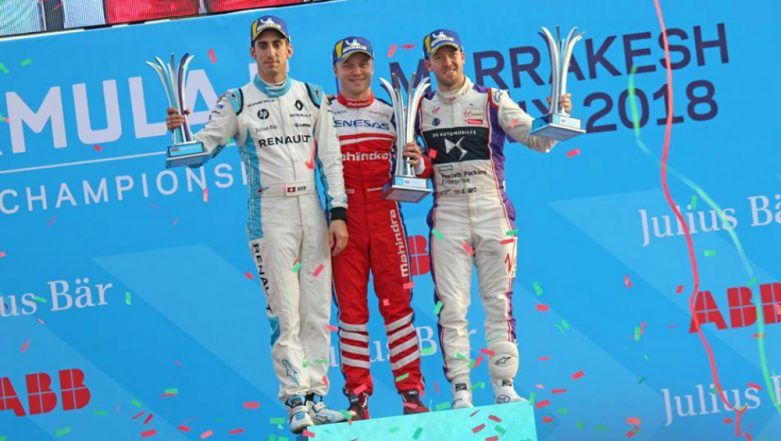 Mahindra Racing’s Felix Rosenqvist bided his time and made amends for missing out on victory in Marrakesh last year with a late move on Sebastien Buemi to clinch his second consecutive win of the Formula E season. The Mahindra Racing driver looked comfortable in the fight at the front and closely followed Buemi for the second stint ready to pounce.

The Swede, who was a fortune to complete the distance after a battery change between qualifying and the race, stuck behind the slipstream of the Renault e.dams driver and made a lunge up the inside of Turn 7 to take the lead.

From there Rosenqvist didn’t look back and held on to victory at the same venue where he lost out on the win in only his second-ever Formula E race.

Buemi, who only managed to score a solitary point in the opening two rounds in Hong Kong, showed a return to form starting from the front of the grid from Julius Baer pole position. The Swiss champion made a clean getaway and led through the pitstop phase, but ultimately lost out to Rosenqvist.

However, it wasn’t such plain sailing for Buemi as his preparations were hampered by an issue with the water pump. The Renault Edams engineers had to invert the order of his cars to ensure they could fix the problem and get him out in time.

It was a similar story for Bird, who remained behind the rear wing of Buemi in the opening laps but gave up the position to Rosenqvist after a recurring technical issue caused him to slow down. Despite relinquishing the place, Bird took the chequered flag in third place to continue his strong start to the season.

Felix Rosenqvist shared the winning pictures on Facebook writing, 'That feeling of winning and taking the championship lead!'

Another name carrying over form from Hong Kong was season one champion Nelson Piquet Jr, who equalled his best-placed finish of the current campaign in fourth for Panasonic Jaguar Racing and scored the extra point for Visa fastest lap. The Brazilian gained a place in the mandatory car swap, coming out ahead of Jose Maria Lopez making his Formula E return with the DRAGON outfit.

Rosenqvist’s team-mate Nick Heidfeld scythed his way through the pack to finish seventh after hitting the wall during qualifying. Formula E debutant Tom Blomqvist claimed points in his first-ever race for Andretti in the eighth.

It wasn’t a day to remember for Nico Prost. The Frenchman and three-time E-Prix winner was pitched into a spin by Andre Lotterer sending him to the back of the field, and later picked up a 20-second post-race penalty for speeding under Full Course Yellow - leaving Alex Lynn and Daniel Abt to round out the top-10 positions.

Race winner Rosenqvist said: “At one point in the day I was going to be settling somewhere in the middle of the midfield after practice as we were struggling a lot. “We then made some analysis and in qualifying, we found out how to work the tyres properly, so that was a really good comeback before the race. I was told I had to change my battery thirty-minutes before jumping in the car before the grid, so I was praying that my second car would be ready. Big thanks to the Mahindra guys,” he added.