Noah Lyles Smashes Usain Bolt’s Record, Only To Realise That he Ran a Shorter Distance due to a Blunder by Organisers (Watch Video) 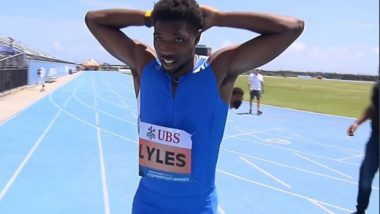 US sprinter Noah Lyles grabbed headlines for almost breaking the record of Usain Bolt. But sadly his record was not considered only because he ran for a shorter distance. Yes, you read it right! The sprinter runs who participated in the 200-meter race at the Inspiration Games in Florida only ran for 185 meters. He covered the distance 18.90 seconds which means he could have smashed Usain Bolt’s record with ease. But owing to the blunder by the organisers, he was denied the record. Usain Bolt Urges Fans to Practise Social Distancing Using Iconic Picture From His 2008 Beijing Olympics 100m Sprint Win.

As reported by the Reuters, “His official result read “shorter distance” and it appeared that the American had started from the wrong line.” The video of the entire incident went viral on social media. The organisers had placed him in the wrong line. Check out the video below:

"That CANNOT be right, can it?"

At first glance, USA's Noah Lyles appears to clock 18.91 in the men's 200m race at the #InspirationGames

But it turns out he began from the wrong starting block, only running 185m, NOT 200m.

Lyles was obviously quite frustrated with the same and said that his emotions can’t be played on like that. "You can't be playing with my emotions like this. Got me in the wrong lane,” said the 22-year-old sprinter. He took to social media to express his dismay. Check out the tweet below:

You can’t be playing with my emotions like this....

got me in the wrong lane smh 🤦🏾‍♂️

The race was finally won by  Frenchman Christophe Lemaitre, running in Zurich, as he clocked 19.80 seconds. The meeting was the Zurich Weltklasse’s response to the deadly coronavirus which has prevented conventional events from taking place.

(The above story first appeared on LatestLY on Jul 10, 2020 08:45 PM IST. For more news and updates on politics, world, sports, entertainment and lifestyle, log on to our website latestly.com).