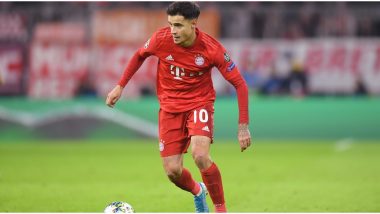 On-Loan at Bayern Munich till the end of the season, Barcelona man Philippe Coutinho is expected to return to the Spanish side once the season concludes. The defending La Liga champions are looking to offload the Brazilain has he has garnered some interest from Premier League clubs and as per recent reports, Arsenal are the latest club looking to sign the 27-year-old on a permanent basis. Coutinho is expected the miss next few weeks of Bundesliga due to an ankle injury. Philippe Coutinho Transfer Update: Chelsea Close In on Signing of the Brazilian Midfielder.

According to a recent report from news outlet Le10Sport, Arsenal boss Mikel Arteta is very much in favour of bringing Philippe Coutinho the Emirates next season. The Brazilian will be a great fit in the Gunner's side, offering them the much-needed experience and creativity in the attack, which very often they lack. Pierre-Emerick Aubameyang Transfer News Update: PSG Interested in Signing Arsenal Striker.

It is understood, that the north London side club have made contact with Coutinho’s agent Kia Joorabchain as the 27-year-old’s future remains uncertain at Barcelona. The Brazilian playmaker joined the Catalans in 2018, and after a brilliant first six months, fell out if favour in his second campaign, eventually being loaned out to Bayern Munich at the start of this season.

Arsenal are not the only Premier League side looking to sign the former Liverpool player, as Chelsea and Manchester United have shown interest in him. Coutinho played for the Reds from 2013 to 2018, establishing himself as one of the best creators in the league, and guiding them to a second-place finish in 2013.

(The above story first appeared on LatestLY on May 25, 2020 05:21 PM IST. For more news and updates on politics, world, sports, entertainment and lifestyle, log on to our website latestly.com).