Philippe Coutinho Transfer Update: Chelsea Close In on Signing of the Brazilian Midfielder 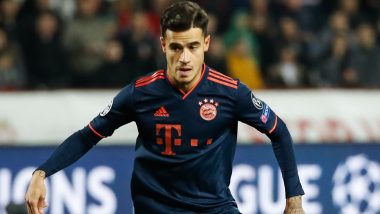 Philippe Coutinho is closing in on a Premier League return as the Brazilian could be a part of the Chelsea squad in the summer. The 27-year-old has failed to secure a position in the starting XI of the Spanish side and according to recent reports, the Blues are ‘very close’ in bringing him to Stamford Bridge. Coutinho joined Barcelona in January 2018 and was sent on loan to Bayern Munich at the start of this season. Manchester United, Chelsea Interested in Loan Move for Philippe Coutinho.

According to a report from Spanish news outlet Sport, Philippe Coutinho is likely to complete a move to Chelsea in the summer as Frank Lampard is interested in the Brazilian. It is understood that the Blues boss views the 27-year-old as the kind of player the teams needs the most and can help them to get back to the very top of English Football.

It is reported that Barcelona ready to sell the Brazilian for €90m despite spending nearly double the amount to sign him from Liverpool. The Blues believe that they can further lower the asking price for the Brazilian as Barcelona are in desperate need to generate funds to sign Lautaro Matinez from Inter Milan.

Philippe Coutinho spent five years in the Premier League with Liverpool, making his name as one of the best playmakers in the game. The Brazilian had a brilliant start to his Barcelona career but an inconsistent second year and playing out of position, for the most part, saw him being loaned out to Munich in order to get some regular playing time.

(The above story first appeared on LatestLY on Apr 22, 2020 02:56 PM IST. For more news and updates on politics, world, sports, entertainment and lifestyle, log on to our website latestly.com).