Sports in the Middle of a Pandemic: As Sportspersons Continue to Test Positive for Coronavirus, a Reminder on How Every Game Can Put Players’ and Others’ Lives at Risk! 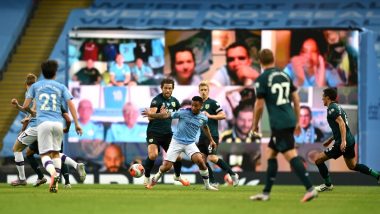 Congratulations! Sports is back again. Live-action is live on television again. We are watching, living the dream, debating and cheering our favourites again. Once more life is full. And a dream that seemed frozen and obscured in arctic is living and breathing again. It doesn’t matter if the players have to go through coronavirus tests every day to determine their eligibility to live in this new world. Nor if they have to follow draconian rules, maintain military obedience and live like they are existing in an isolated island where talking means murder and touching others could buy prison time. Footballing action is kicking again and cricket will soon follow by July even if it is under stringent conditions baited under the conception of bio-secure facilities. Novak Djokovic, Wife Jelena Test Positive for Coronavirus.

But even as sports resumes under the presumption that the world was reviving itself again salvaging what was lost in the gnaws of the novel virus, it is the players at risk. They are nothing but subjects at the hands of powerbrokers, who must profit no matter what. 10 Pakistani cricketers tested positive on Tuesday hours later after Tennis World No 1 Novak Djokovic and his partners, who don’t give a damn on lives and situations, reported the same result. List of Sportspersons Who Have Tested Positive for COVID-19: From Novak Djokovic to Players From Pakistan Cricket Team, Here’s All Those Who Contracted Coronavirus.

The only difference between the Pakistan national team and Djokovic and his friends was one was preparing to play again. The other had defied laws, preparations, alarms and approaches to playing. Djokovic and group’s actions and Pakistani team’s precautions tell us again why sports is really a bad idea in the middle of a pandemic. But the Premier League has started fine, the Bundesliga is on its final legs (ends this Saturday) and the Serie A looked good. Is sport then ready to relaunch again? Fakhar Zaman, Mohammad Rizwan Among Seven New Pakistan Cricketers to Test Positive for COVID-19.

Perhaps it is. Maybe not. Certainly not when people are still dying, the virus is still spreading and endangering lives. Over 65, 000 new cases were reported on June 23 worldwide. More than 2000 people are still dying by the day. The toll could soothe and sound your mind as you calculate what you heard exactly on this time a month ago. Yes, the daily COVID-19 toll is shrinking but not everywhere. India reported over 900 cases on Tuesday with three hours still left on the clock for day-end. The pandemic is certainly not yet over. It is, as experts warn just two feet away from a second global spike. And in the middle of such a turmoil, sports is back again.

Despite all the preventive measures it undertook. Despite building a bio-secure environment in 20-plus stadiums, disinfecting players at every go, testing them and following ironclad regime, the Premier League has still reported 18 positive coronavirus cases. Yes, names have not been given out. But reports, one such case came minutes before Manchester City took on Arsenal on League return. The game still went ahead – of course after the players had been swabbed again, disinfected and made ready for the spectacle they were to display. But imagine the player, who tested positive and the people, families, colleagues, opposition members and everyone else he met before the results showed red and he was sent for another cleansing.

Or maybe imagine a Novak Djokovic. He organises a tennis tournament and even as the world outside criticises and castigates him, he and his friends – Dominic Thiem, Alexander Zverev, Grigor Zverev, Viktor Troicki and others are heroes to those that watched them play after months and days of isolation, numb and ghostly dreams. Djokovic plays in Serbia, Croatia, is denied in Montenegro and all these in packed venues. He also parties late night and finds the next day he has tested positive. The 17-time Grand Slam champion immediately puts out a statement “I hope that it will not complicate anyone’s health situation and that everyone will be fine.” But does he remember the people he met or do they?

But how long? The Premier League and La Liga can still sustain – thanks to their TV and broadcasting rights in millions. But others. The crowd can never be kept off. If not at stadiums, they are outside it. Outside hotels. Maybe they don’t want to go but sports is madness. It drives you crazy. Why wouldn’t a Bologna fan run to meet or click a selfie with Cristiano Ronaldo? Why wouldn’t a fan sneak into a Barcelona game and kick Lionel Messi’s feet? Oh, Why?

A report analysing and breaking down Bayer Leverkusen’s journey and preparation to play in the Bundesliga explained how the players lived more like they were in military camps than in hotels. There were temperature checks before and after every meal, match and every day. Players had to report their sleeping patterns, time of sleep and number of baths. Showers or changing clothes were not allowed in stadium washrooms. No moving out of hotels, no meeting family members and above all masks at all-time. Routines mentioned above were a just a part of what was followed by all Bundesliga teams, perhaps even in the Premier League, La Liga and Serie A.

Why then all this? These quarantine routines that make you feel untouchables, these matches when it could have waited or these lives, who have become entertainers more than humans. “Football is back again.” “Thank God it has returned.” “Ohh, life seems to be moving again” flowed on Twitter as sports resumed again. Fans were happy but footballers and their families? Ohh, who cares. Sports is back again. But at what cost?

(The above story first appeared on LatestLY on Jun 23, 2020 10:21 PM IST. For more news and updates on politics, world, sports, entertainment and lifestyle, log on to our website latestly.com).