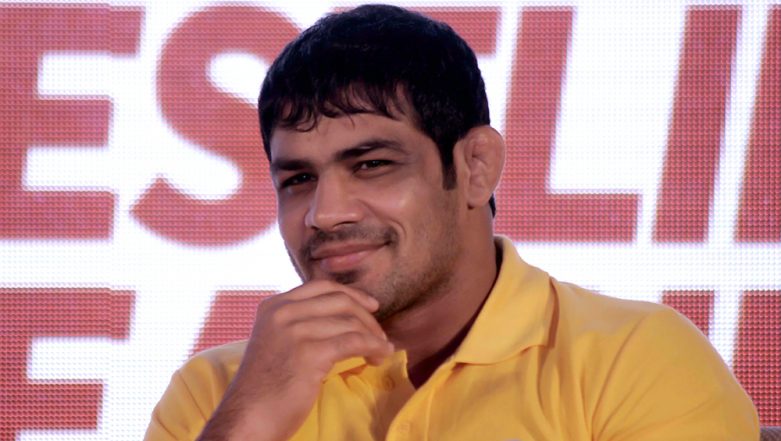 New Delhi, August 20: Sushil Kumar on Tuesday sealed his spot in the Indian contingent that will go to Nur-Sultan in Kazakhstan for the wrestling World Wrestling Championships that starts on September 14. In the trials that were held at New Delhi's KD Jadhav Stadium, Sushil beat Jitender 4-2 to ensure that he represents India at the World's in the 74kg category. Deepak Punia Becomes First Indian Junior World Champion in 18 Years.

In what turned out to be a rather rough final, Sushil raced to a 4-0 lead in the first period of the bout. Jitender was hit in the eye leading to a break in which he received medical attention. Sushil was apologetic and repeatedly said that it happened by mistake and the bout went ahead when his opponent recovered. Jitender can still go for a spot in the team if he manages to beat Veerdev Gulia in 79kg on August 23. Bajrang Punia Wins Gold Medal in 65kg Freestyle at Tbilisi Grand Prix 2019 Wrestling in Georgia.

The 36-year-old Sushil, who had won the World Wrestling Championships in 2010 in the 66kg category, joins Ravi Dahiya (57kg), Bajrang Punia (65kg), Deepak Punia (86kg), Mausam Khatri (97kg) and Sumit Malik (125kg) amongst those wrestling in the Olympic categories at the World's, which serves as a qualifier for Tokyo 2020. Others who sealed their spot in the Indian contingent on Tuesday are Rahul Aware (61kg), Karan Mor (70kg) and Praveen (92kg).