Murray and Kyrgios, both of whom advanced to the second round of the competition were unimpressed as fans repeatedly chanted 'SIUUU', a chant made popular by Cristiano Ronaldo. Murray said, ".. they're doing that, I think it's like 'siuuu' or something that Ronaldo does when he scores. And, yeah, it was incredibly irritating." 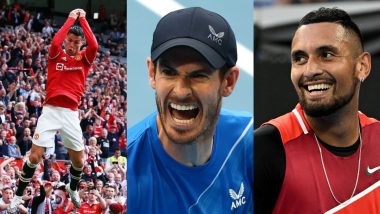 Cristiano Ronaldo's famous, 'SIUUU' celebration is something that football fans are so used to hearing, especially whenever Manchester United or Portugal play. But it did not sit well with Andy Murray and Nick Kyrgios, both of whom are competing at the Australian Open 2022, the first tennis major of the year. Murray made a triumphant return to the Australian Open, bringing up his first victory in the competition since 2017. For those who have not heard about the famous Ronaldo 'SIUUU' celebration, it is a sound that the Portuguese and Manchester United forward makes after landing following a little leap in the air. To many, it might come across a sound similar to a 'boo', which is something that crowds do to jeer the sportspersons. Australian Open 2022 Day 2 Highlights: Look Back At Top Results, Major Action From Tennis Tournament in Melbourne

Murray was left confused with such chants after he clinched a thrilling five-set win over Nikoloz Bashiashvili to move into the second round of the competition. While speaking after the match, he said, "Initially, I thought it was (jeering) because there were some people booing during my practice yesterday. I have no idea what for, so originally that's what I thought it was," adding, "But then after a few times, it was like, no, they're doing that, I think it's like 'siuuu' or something that Ronaldo does when he scores. And, yeah, it was incredibly irritating." Nick Kyrgios Advances To Next Round Of Australian Open 2022 With Win Over Liam Broady

Murray's words were echoed by Nick Kyrgios, who too did not like the crowd chanting Ronaldo's 'SIUUU' and called it, 'stupid.' Kyrgios beat Liam Broady in straight sets to proceed to the second round, where he now faces world number two Daniil Medvedev. After his victory, even he enacted the celebration. Andy Murray Beats Nikoloz Basilashvili in Men’s Singles First Round, Registers First Australian Open Win in 1822 Days (Watch Video Highlights)

He said, "Yeah, it's just a stupid (thing), I can't believe they did it so much. They were doing some Ronaldo thing. Ronaldo does it every time he scores. I thought they were going to do it for like 10 minutes. They did it for two-and-a-half hours, like every point. I don't know why I don't know. It was a zoo out there."

(The above story first appeared on LatestLY on Jan 19, 2022 11:35 AM IST. For more news and updates on politics, world, sports, entertainment and lifestyle, log on to our website latestly.com).