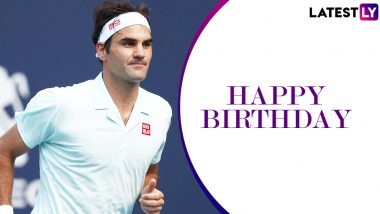 Twenty-time Grand Slam champion, Roger Federer celebrates his 39th birthday on August 8, 2020 (Saturday). Federer has won a record eight Wimbledon titles and is the only second tennis professional to win 100 or more career singles titles and also the second player to record 1200 wins in the open era. Apart from his eight Wimbledon titles, Federer has also won six Australian Open trophies, five US Open and a French Open title. His last major win was at the 2018 Australian Open, which made him the first-ever men to win 20 Grand Slams. On his birthday, take a look at some interesting facts about Roger Federer. Roger Federer Admits ‘Retirement Getting Closer’ but Still Determined to Play More.

Federer also reached the 2019 Wimbledon final but lost in five sets and a tie-breaker against Novak Djokovic. That match was marked as the longest men’s final in Wimbledon’s history. Federer also has an Olympic medal to his credit. The Swiss maestro lost the final to Andy Murray and had to settle for a silver at the 2012 London Olympics. He also has a gold medal in men’s doubles which he won partnering Stan Wawrinka at the 2008 Olympic Games. Take a look at some lesser-known facts. Roger Federer Says Haven't Been Home This Long in 25 Years.

(The above story first appeared on LatestLY on Aug 07, 2020 09:00 PM IST. For more news and updates on politics, world, sports, entertainment and lifestyle, log on to our website latestly.com).