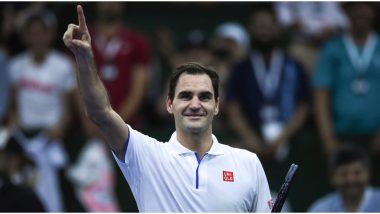 Swiss tennis ace Roger Federer might be in fag end of his illustrious career. However, the veteran player is still determined to add some more feathers to his hat. Current place at the fourth position in ATP rankings, Federer recently said that he misses the feeling of being on the court and is eagerly waiting to get back in the groove. The 38-year-old, however, also admitted that he’s in the twilight of his career and hanging up the moments will be easier at the moment. Nevertheless, he will want to give himself a chance of serving the game for some time. Roger Federer To Stay Out Of Action Until 2021 Due to Knee Surgery.

“In principle, I was only concerned with my health, but now I miss the feeling of playing in a full stadium,” Federer told the German newspaper Zeit. “Retirement is getting closer and I will miss tennis so much. It would be easier for me to retire now, but I wanna give myself a chance to keep enjoying my time on the court,” he added.

Well, Federer is regarded as one of the best players to step onto the Tennis court and his records are nothing less than sensational. The maestro has as many as 20 grand slam titles, most for any player. Also, he’s one of the two players to have more than 100 ATP titles. Hence, his retirement will certainly break a lot of hearts of the fans.

As of now, Federer is on a year break from the game as he underwent two knee surgeries in the past month and is presently recovering from it. Nevertheless, he said that he’ll soon start fitness training with his coach Pierre Paganini.

“Pierre Paganini asked me once after surgery, but you know, we‘re then going to do fitness units of between 16 to 18 to 20 to 24 weeks, do you really wanna do that!? and I thought to myself, oh yes, this is really,” Roger told SRF Sport.

Federer will be back in the Tennis court in 2021 and it will be interesting to see how the legendary player will make a comeback from the injury.

(The above story first appeared on LatestLY on Jul 09, 2020 10:25 AM IST. For more news and updates on politics, world, sports, entertainment and lifestyle, log on to our website latestly.com).