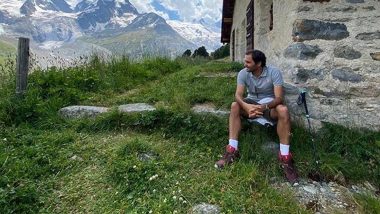 Roger Federer has wished his fans a Happy National Swiss Day 2020. The Swiss Tennis maestro wishes his followers with a couple of lovely pictures on his Instagram page. August 1 is celebrated as the National Swiss Day in Switzerland since 1991. The day was first observed in 1891 and was officially recognised in 1994. The legend goes that the National Swiss Day was inspired by the date of Federal Charter of 1291 and is observed as the foundation day in Switzerland. It is observed as Independence Day in the country. Roger Federer Surprises Italian Rally Sensations, Joins Them in Rooftop Tennis Match (Watch Video).

Federer posted a series of images and captioned the images “Happy National Swiss Day🇨🇭” to wish his followers and fans on a special occasion. With tennis events around the world suspended, Federer has been practising Tennis in his residence and keeping himself ready for whenever the sport resumes. The 20-time Grand Slam winner has also been keeping his fans updated with regular posts on social media. Roger Federer Almost the Perfect Tennis Player On and Off Court, Says Stefan Edberg.

To celebrate the day, a section of the Alps were lighted on Friday night to mark the Switzerland national day. An event observing the covid-19 protocols was also hosted. The mountain chains of Veisivi and Dent de Perroc, which tower nearly 4,000 metres (13,000 feet)in the southern canton of Wallis, saw more than 100 kg (220 lbs) of magnesium powder ignited in the event.

(The above story first appeared on LatestLY on Aug 02, 2020 12:38 AM IST. For more news and updates on politics, world, sports, entertainment and lifestyle, log on to our website latestly.com).